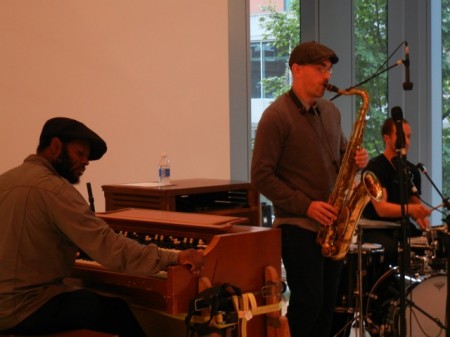 Tacoma-based saxophonist Kareem Kandi brought his band to the Art Of Jazz Series at The Seattle Art Museum this month and played a hard-swinging concert enjoyed by an enthusiastic audience that filled Brotman Forum at SAM.  Saxophonist Kreem Kandi was joined by B3 organist Delvon Lamar and drummer Adam Kessler in a classic organ trio performance that included standards and originals.  The concert was recorded for Jazz Northwest and will air on Sunday, October 20 at 2 PM PDT.

Kareem Kandi is a Northwest native who studied at Olympic College and the Cornish College of the Arts.  His big Dexter Gordon-style sound is comfortable fit in an organ trio format that reflects the tradition while adding new songs to keep it fresh.  Two originals by Kareem Kandi are included in this performance.

The performance was part of the regular Art of Jazz Series and the current Earshot Jazz Festival presented and produced by Earshot Jazz, John Gilbreath, Executive Direcotr with the support of the Seattle Art Museum and 88.5 KPLU.  The Art of Jazz Series is presented on the second Thursday of each month from 5:30 to 7:30 pm. The concerts are free and open to the public.  The next concert in the series will feature The Bill Anschell Quartet on November 14.

Jazz Northwest is recorded and produced by Jim Wilke exclusively for 88.5 KPLU.  The program airs Sundays at 2 PM Pacific and is also available as a podcast at kplu.org following the broadcast.