TULA’S JAZZ CLUB: Josh Deutsch Quintet
from Earshot Jazz: Before graduating from the New England Conservatory and moving to Queens, Josh Deutsch discovered his love of jazz trumpet within the Washington Middle School and Garfield High School music programs. Deutsch has since emerged as an accomplished educator and composer. His compositions and arrangements have been performed by artists from the Seattle Symphony Orchestra and Ruth Marshall to the Oregon Jazz Ensemble, Ron Miles and Danilo Pérez. Deutsch has received commissions from the “From the Top” radio show, the Seattle Symphony Orchestra and Music Northwest. More recently, Deutsch has completed the “Ligeti Project,” a twelve movement cross-genre work for jazz septet, based loosely around Györgi Ligeti’s Musica Ricercata. At Tula’s on November 30th, 7:30 PM, Josh Deutsch will lead his exciting quintet of Steve Treseler (saxophones), Dawn Clement (piano), Evan Flory-Barnes (bass), and D’Vonne Lewis (drums).

Hope you had an excellent thanksgiving!
I’m writing to let you know about a show I’ll be playing this coming Monday (Nov. 30) at Tula’s. I’ll be playing with some of my favorite Seattle area musicians, so this promises to be a very fun show. We’ll be playing a mix of originals and pieces from the great jazz composers, including Billy Strayhorn, Bill Evans, Lennie Tristano, Kenny Wheeler & Dizzy Gillespie.

from the Save KBCS blog:

To the supporters of SaveKBCS and the campaign to return KBCS to the
community radio station we knew and loved,

Join us Friday evening, November 27th, 5:30-7pm, outside Town Hall
Seattle for a demonstration against the radical program changes at
KBCS and the arbitrary dismissal of 15 longtime, volunteer music
programmers.

We will gather on the sidewalk in front of Town Hall Seattle, 1119 8th
Ave at Seneca Street,
(http://www.townhallseattle.org/directionsAndParking.cfm) about 5:30pm
before the speech by Amy Goodman, founder and executive producer of
Democracy Now, scheduled for 7-9pm.

Bring a protest sign of your own choosing announcing your
displeasure/anger/indignation about the changes at KBCS. Or print out
one from http://www.Savekbcs.org – go to the “Downloads” tab.

SaveKBCS will provide information handouts for people to educate
themselves about the summer of 2009 coup d’etat at KBCS.

Isn’t it ironic that KBCS’s flagship public affairs program “Democracy
Now” advocates democracy as a form of government, but KBCS management
goes to great lengths to avoid the democratic process when making
widespread programming changes? Bring back the democracy to our
community!

Amy Goodman has appeared in Seattle many times over the years in
fundraising efforts for KBCS. Her show is also carried on KBCS. What
better place to demonstrate than in front of Seattle’s historic Town
Hall, a nonprofit organization with deep roots in Seattle’s civic
life. Town Hall is Seattle’s community culture center located in the
historic First Hill neighborhood on the edge of downtown. Town Hall
showcases the community’s cultural energy with diverse music, arts and
humanities, civic discourse, and world culture programming.

(Please note that this is NOT a protest against Amy Goodman, her
speaking event, or the”Democracy Now” show. It is a protest against
KBCS management’s decision to cut music programming, add syndicated
talk shows and dismiss 15 local volunteer programmers).

Thank you!
from the Steering Committee of Save KBCS 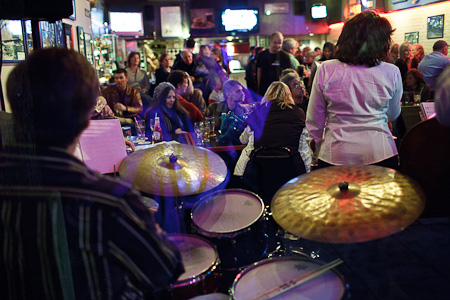 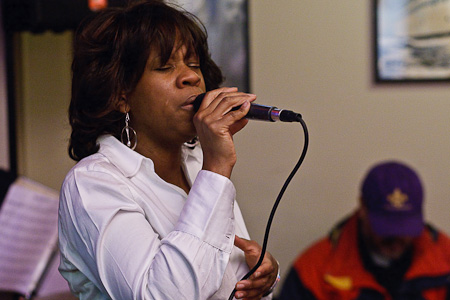 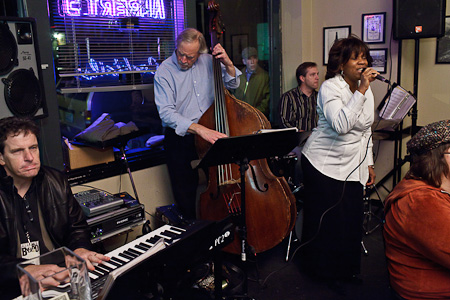 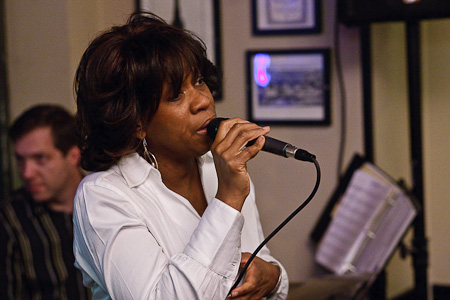 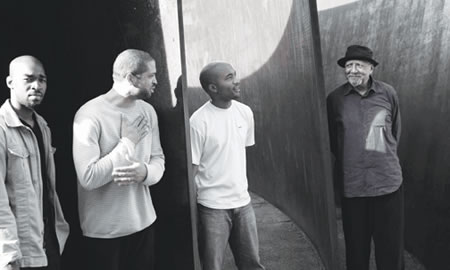 Lloyd’s New Quartet is a relatively young but well-established group of musicians who are fully capable of sharing Lloyd’s pursuits. A leader in his own right, Jason Moran (piano) brings a mature second lead voice to the group. Reuben Rogers (bass) and Eric Harland (drums), one of the most exciting rhythm teams in jazz, form a shifting tonic that’s perfect for bringing the exotic structures in Lloyd’s compositions to life. The group’s recent ECM release, Rabo de Nube, recorded live at a 2007 concert in Switzerland, captures the New Quartet’s energy and sophistication.

Lloyd, who recently turned 70, has significantly refined the strong musical presence best exemplified in his Forest Flower release of 40 years ago. For Lloyd, art is a personal journey; the search for an internal truth comes out in the music. Summed up by Lloyd himself in an address on his Web site: “The pursuit and the music are one.”

Tickets are $10-$35 in advance through Brown Paper Tickets at brownpapertickets.com or 800-838-3006. Discounts available for Earshot members, senior citizens and students. Tickets also available at the door on the day of show from Earshot Jazz. Call Earshot Jazz at 206-547-6763 for more information.

photos by Jim Levitt from The Ballard Jazz Walk 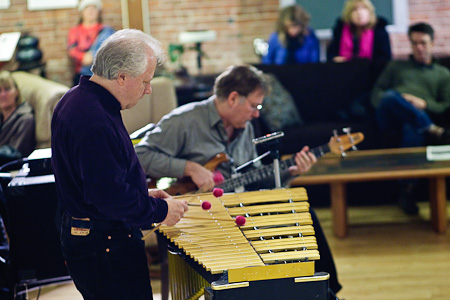 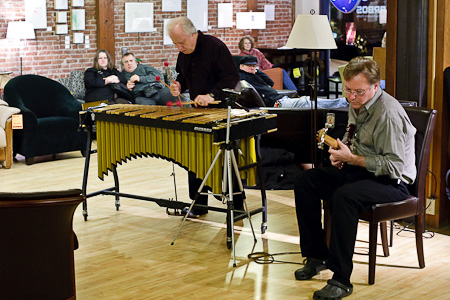 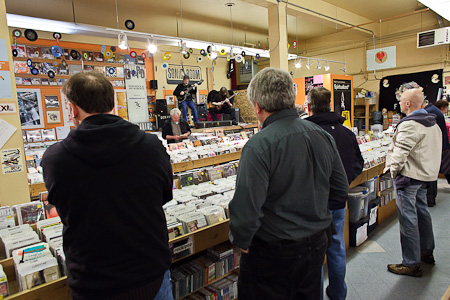 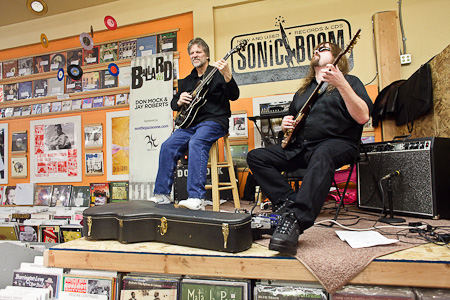 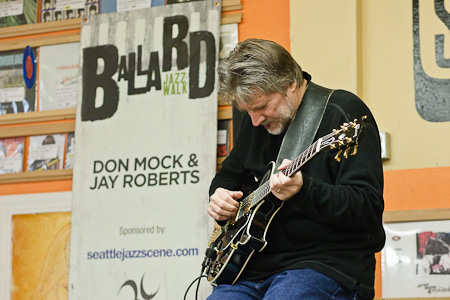 Sushi master Hiroshi and his gang prepare a full menu of Japanese cuisine that is fresh, tasty, and full of flavor – all matched with some very special sake and beverages (try the plumb wine) Favored by local Japanese and music lovers, Hiroshi’s has been featuring live jazz on Friday nights for over three years – presented by the Pony Boy Records stable of artists. Come by for some fine food, and see who will be sitting in with the band – Fridays have become a ‘happening’ on Eastlake! Cheers! 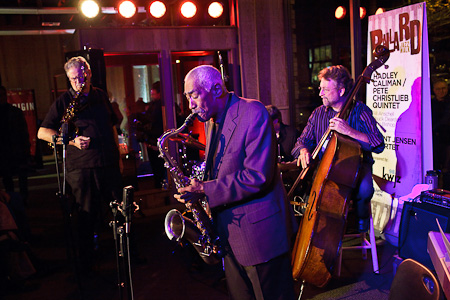 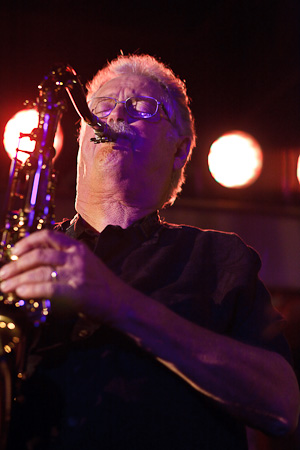 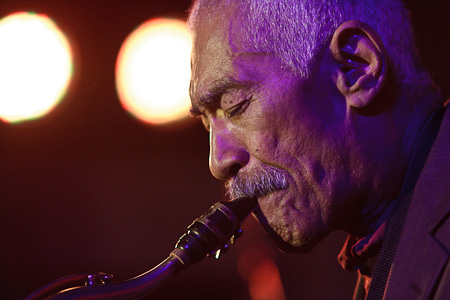 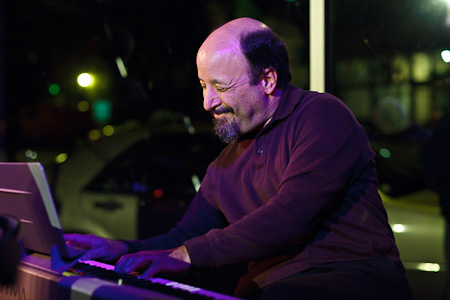 END_OF_DOCUMENT_TOKEN_TO_BE_REPLACED

It’s a curious irony that at a time when entire music collections can be shrunk down to the size of a couple of sticks of gum, certain music packages keep getting larger.

Hot on the heels of the much-celebrated remastered Beatles sets, Sony Legacy is releasing “Miles Davis: The Complete Columbia Album Collection,” a beautiful but somewhat daunting stockpile of 52 albums on more than 70 CDs spanning four decades in the jazz trumpeter’s storied and fiercely unpredictable career. 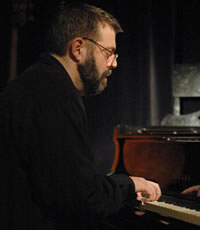 BUY ONLINE:
Visit the Ballard Jazz Walk website for tickets, complete schedule and artist biographies. There is no service charge for buying your ticket online.
http://www.ballardjazzfestival.com

BUY IN PERSON:
Visit the Ballard location of Sonic Boom Records to purchase a Jazz Walk ticket in person. There is an additional $1 service charge and you will have to pay in cash (tickets will be $21 total).

DID YOU ALREADY BUY YOUR TICKET?
If you already purchased your ticket online you can pick up your tickets on Friday at Will Call starting at 5:00pm.