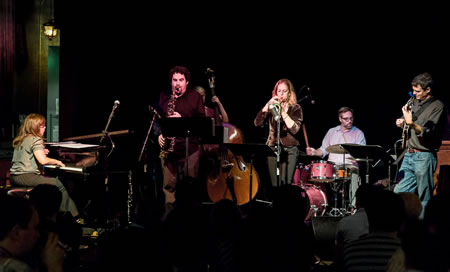 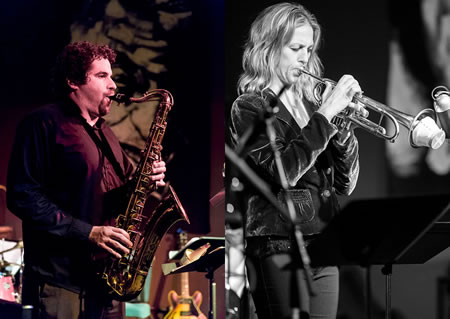 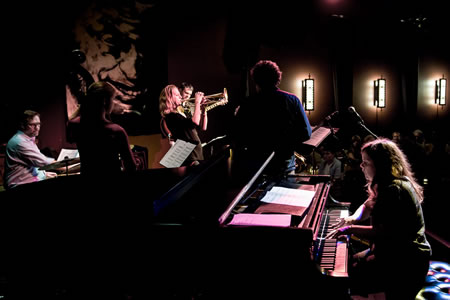 For more photos of this event, and all Earshot events, visit EyeShotJazz.com 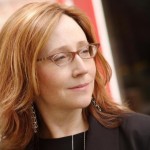 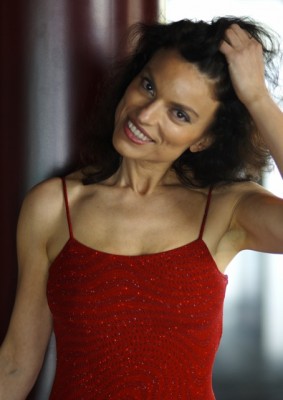 Jazz Northwest previews and samples upcoming events every Sunday afternoon at 2 on 88.5 KPLU. This Sunday (10/27) will include CDs by Roy Hargrove, Roberta Gambarini, the Jim Knapp Orchestra, Darcy James Argue and others appearing in Seattle concerts, as well as some new releases by resident Northwest musicians.

Jazz Northwest is produced and hosted by Jim Wilke, exclusively for 88.5 KPLU. The program is also available as a podcast at kplu.org

PONCHO Concert Hall, Cornish College, 8pm
Nicole Mitchell Ice Crystal Quartet
Mitchell, “the most important jazz flutist of her generation” (All About Jazz), plays in the spirit of the Association for the Advancement of Creative Musicians: she draws gospel, African percussion, and other elements into a thrilling extension of jazz. With Jason Adasiewicz (vibes), Joshua Abrams (bass), and Frank Rosaly (drums). $22 general/$20 members & seniors/$11 students    [read more…]
BUY NOW

Saturday and Friday night at Tula’s I saw the George Colligan Trio, part of the Earshot Jazz festival.

And then this is happening …

Make the trip up to North Bend for what will be an amazing show.

NW Film Forum, 7PM
Director in Attendance!
John Coltrane Ascension Double Bill
John Coltrane’s Ascension was called, “…the most powerful human sound ever recorded” in Down Beat Magazine in 1965, and “the most vexatious work in jazz history” by jazz critic Gary Giddins. These contradictory claims indicate just how controversial this music was at the time Coltrane recorded it in 1965. Ascension in fact still causes arguments; the ideas behind the music are still alive and making waves. All the more reason to rejoice in Electric Ascension, reincarnated for the 21st century in live performance by the large, fluctuating ensemble “Orkestrova”. This program features a concert film performance of Ascesion as re-imagined by the Sax quartet Rova plus a behind the scenes look at how the performance came together.

Electric Ascension, Live at the Guelph Jazz Festival
(John Rrogers, USA, 2013, blu-ray, 68 min)
Famed for its scale and raw emotional power, John Coltrane’s 1965 recording, Ascension, has been re-imagined and rearranged for live performance by an all star ensemble of improvisers led by the Rova Saxophone Quartet.

Cleaning the Mirror
(John Rrogers, USA, 2013, blu-ray,45 min)
A documentary on the musical history and creative process behind Electric Ascension. Shot at jazz festivals in Paris and Saalfelden (Aus.), Musicians speak about their inspiration, their approach to the music, and their connection to Coltrane. Interviewed are Nels Cline, Andrew Cyrille, Art Davis, Jason Kao Hwang, Eyvind Kang, Rova, Jenny Scheinman, and Elliot Sharp. With musical excerpts, archival photos, and behind the scenes footage.

NW FILM FORUM, 7PM
Charles Lloyd: Arrows Into Infinity
(Dorothy Darr, Jeffrey Morse, 2012, USA, 120min)
Charles Lloyd: Arrows Into Infinity is a journey in sound through the unusual life and career of this jazz legend, Charles Lloyd, one of the most influential jazz musicians of the 1960s. His music crossed traditional boundaries and explored new territories. Catapulted into worldwide fame in his 20s, by his early 30s, he abandoned his life of touring and recording and went into seclusion in Big Sur, CA. Here, Lloyd and those who worked with him over the last five decades help us better understand this enigmatic man and his spiritual pursuit through music.

Mr. Heldman was the proprietor and also a performer at the Llahngaelhyn, a legendary coffee house located in the fairy castle-like building just south of the University Bridge that hosted jazz from 1965 to 1968.

Mr. Heldman died Oct. 11 in Yacolt, Clark County, after being bedridden for two years with heart failure and Chronic Obstructive Pulmonary Disease. He was 76.

Read more at The Seattle Times.

Jerry taught me so much and used to run to great jam session places in Seattle.

(re: the Llahngaelhyn) I went there a lot…had some great times and learned tons from Jerry and all the older cats down there…I got to play with McCoy Tyner one night late after his gig with [Art] Blakey at the Penthouse…I went to the QueeQueg also and used to hear Joe Brazil and so many cats…Jerry was a very dedicated musician and could really play