There’s lots of live jazz around Seattle and the Pacific Northwest, and new CDs by resident artists appear nearly every week. On this week’s show there are new releases from an East-West Trumpet Summit with Ray Vega & Thomas Marriott, Nelda Swiggett’s Trio, Wellstone Conspiracy, and guitarist Corey Christiansen who’s celebrating a new CD with gigs in Seattle and Vancouver BC this week. You’ll also get an update where to go for live jazz in the coming week on Jazz Northwest. 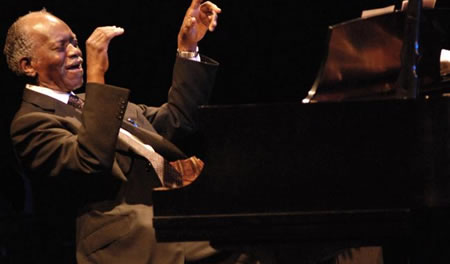 Also this weekend on Jazz After Hours on PRI (12M – 5 AM Saturday and Sunday on KPLU), Jim remembers the rich legacy of pianist Hank Jones, who died last week at the age of 91. Hank Jones’ career spanned over sixty years, from Jazz at the Phil with Coleman Hawkins, Charlie Parker, and others to the present decade – he was to play with Joe Lovano at Birdland next week. There will be two or three selections by Hank Jones in each hour of Jazz After Hours this weekend.

Among his many awards, Hank Jones was recipient of the NEA Jazz Masters Award in 1989, The National Medal of Arts in 2008, and a Grammy Lifetime Achievement Award in 2009. He toured all over the world and appeared on more than a thousand albums.