Sam Yahel has received a lot of attention in the jazz world recently, including an impressive four year series of wins in the Down Beat Critics Poll as Talent Deserving Wider Recognition. Truth and Beauty – his most recent CD on Origin featuring Joshua Redman and Brian Blade – has received significant international jazz radio airplay and was voted one of the 2007 Top Ten by The New York Times. 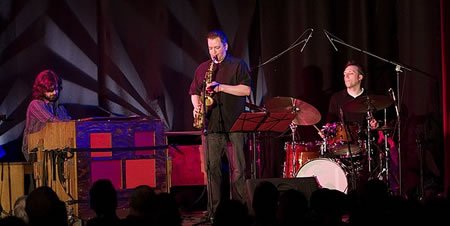 After hearing him in concert it’s easy to understand why he’s making waves. The Hammond organ is customarily associated with a funky, blues-based, down home kind of groove jazz, as personified by the likes of Jimmy Smith, Brother Jack McDuff, Richard “Groove” Holmes, et al. Yahel can groove with the best of them, but his approach is decidedly multi-faceted, and he could be considered as part of the continuation of a line of organ innovators like Big John Patton, Larry Young and Alice Coltrane than he is an inheritor of the Smith legacy.

His personal sound on the instrument was evident from the very beginning of this set. The trio began with an African-ized arrangement of the Beatles’ classic “Norwegian Wood,” a song title certainly apropos to the concert’s location in the Nordic Heritage Museum. Yahel’s registrations on the intro evoked aural images of kalimbas and balaphones. There was plenty of dynamic range in this performance and Mark Taylor‘s alto solo was delightful.

Alec Wilder’s “Moon and Sand” was done as a bossa nova, beginning with organ and drums before Taylor joined in. A favorite of Marian McPartland’s, this lovely Wilder melody has been infrequently interpreted by other jazz players (Kenny Burrell and Gil Evans are among the few who have championed it.) It’s a beautiful song, and the trio did it justice in a version that dropped the dynamics down toward the end and reverted to its ballad origins. There was a canny and oblique quote from “Mona Lisa” slipped unobtrusively into the organ solo just before the group changed the mood. 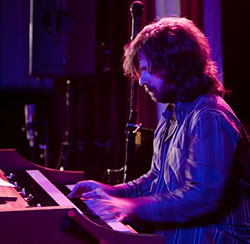 Yahel’s original, “Truth and Beauty,” began in a free mood with Jorgensen using his hands on the set, coming up with some great textures. When he switched to sticks and Yahel pulled out a few stops things launched into a blazing up-tempo. Taylor took a verbose, multi-noted solo that swung fiercely. Yahel’s command of the bass pedals is impressive; he can keep a wicked groove going with his feet while moving quite freely on the keyboard, truly a sign that he is a “real” organist and not just a keyboard player doubling on the instrument. Like the trap set, the organ demands almost superhuman coordination, with all four limbs involved in the creation of the music. There were points following the organ solo when Taylor came back in that practically levitated the harmony. Yahel’s bass whirlpool spun while he and Taylor engaged in a remarkable segment of moving harmonies that made the group sound considerably larger than a trio. In a conversation after the concert, an organist friend pointed out to me that these harmonies were moving in sixths, a relatively rare occurrence. My knowledge of the technical side of this legerdemain is rather limited, but I know that it reached me on an emotional level very deeply. The Kundalini energy was rising, that’s for sure. There were parts that sounded as if Taylor was playing a Varitone or other type of amplified and/or electronically altered saxophone, but it all sprung from those moving harmonies and the way he and Yahel were so uncannily entrained. A brief unaccompanied organ solo in rubato with a wide variety of unorthodox registrations led to a beautiful segment in a very slow tempo with Jorgensen on mallets. This segued to an undeniably funky groove that felt like it was about to take off, but held back a bit, building the suspense. There were hints of “Manteca” from Yahel as this portion built up, then they brought the volume down again as Taylor entered. Things gradually got more heated with the alto pushing the envelope a bit. Then they brought it back down at the ending. This was a colorful and emotionally charged performance that never stayed in one mood very long.

Yahel’s composition “Oumou,” dedicated to the marvelous Malian Wassoulou singer Oumou Sangare, has an infectious West African tinged rhythm. He joked at first that it was a Scandinavian tribute, then said: “No, it’s African!” Yahel obviously has extensive knowledge of and affinity for the rhythms of West Africa, both traditional and modern. One can almost hear calabashes, koras, djembes and kamelen n’gonis in the way he voices the organ, of course combined with western electronic instruments as the feminist diva of Wassoulou does in her own music, which bridges traditional hunting songs from south of the Niger River with sounds of the world and socially conscious lyrics.

“Hometown” was introduced with Yahel talking about how difficult it is to name tunes. He mentioned that this one originally reminded him of Bruce Hornsby, so he had decided to call it “Hornsby,” then thought better of it, and settled on “Hometown” because it had that kind of a feel to him. It’s a stomping hard bop oriented piece that elicited a wailing organ solo with a tongue-in-cheek “Stranger in Paradise” quote thrown in and some of Taylor’s most aggressive soloing of the night. He really took flight on this one with a hard-edged tone reminiscent of latter-day Art Pepper.

This was a high-energy set from a group that scuttles stereotypes of what a “jazz organ group” has to sound like.