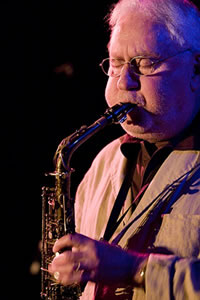 Lee Konitz certainly needs no introduction to jazz fans. He’s been a major player for 60 years. That’s quite a remarkable achievement when you consider how many greats have come and gone in that span of time. He first attracted attention for his solos with Claude Thornhill’s orchestra in 1947 and only two years later took part in the recordings generally credited as the first “free” improvisations in jazz, captured for posterity with his mentor Lennie Tristano. He also took part in the sessions that produced the epochal Miles Davis Birth of the Cool. It would take a Britannica-sized book to list all of his credits since then. He’s been primarily a leader of his own groups for well over 50 years now. He looks great and sounds great at an age when most Americans have long since retired. The old cliché that music keeps you young applies here.

His liquid, pellucid tone on alto remains a thing of wonder. In the stereotype- crazy lexicon of jazz journalism he has long been considered part of the “cool school.” There may be a grain of truth in that pigeonhole, but many listeners seem to have missed the intense emotion with which he plays. It may be a cool burn – sometimes – but it’s a burn nonetheless. Konitz has made a career out of courting risks. The man never plays it safe. And as jazz critic Larry Kart put it: “The ethereal lyricism of Konitz’s earliest recorded work, related though it was to Lester Young, was an essentially private affair that existed outside the mainstream of jazz history.” His playing can also be – presumably purposefully – anti-lyrical; it’s as if he is stretching the limits of just how much he can fragment a melodic line before it loses its focus.

It’s a given in all definitions of jazz that improvisation is one of the music’s most essential ingredients. The paradox comes up and slaps us across the face when listening to many players – particularly in this age when neo-classicism has taken most of the seats at the front of the bus – that what passes for improvisation is often replication of something previously improvised or skilled interpolations from a grab-bag of licks and patterns. Konitz is one of the rare musicians who always seem to be standing up in the rollercoaster car at the top of the most precipitous and winding ramp. He’s not wearing a seatbelt that’s for sure. Pianist Galper stated – and I’m paraphrasing here – that in the nine months he toured with Konitz as a duo, playing six nights a week, the alto saxophonist never repeated himself or fell back on pet licks. 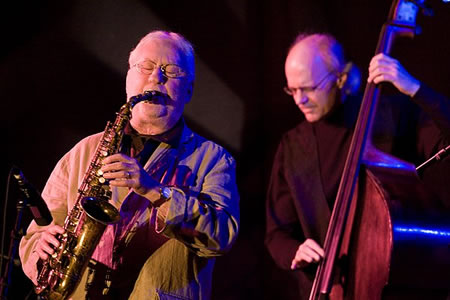 Konitz is in a class by himself when it comes to melodic improvisation. He can invent more memorable melodies in any given five-minute period than most composers come up with in a lifetime. Like Tristano and Charlie Parker, many of his elaborate melodic and rhythmic filigrees are wrapped around standards such as “All the Things You Are” or “Alone Together.” The liberties he takes with these frameworks are often so radical as to leave one at a loss as to the source material. His spontaneous melodies tend to overshadow the originals, if they’re ever stated at all. For this reason, I’m not even going to attempt to identify the unannounced pieces he played this evening. It’s like trying to describe the taste of a great wine by depicting the shape and color of the bottle. To be completely honest, I didn’t recognize most of them anyway!

The set began with piano and alto in duo with a very abstract, impressionistic episode that flowed gracefully, Galper’s solo much more restrained than he was the previous evening in trio format. As the full group entered the volume came way down for a dulcet bass solo spurred on by alto interjections that toyed with the rhythm. This was extremely intimate, conversational, open-ended music.

A solo piano intro set the stage for the next segment, then alto/piano in duo, next joined by bass and finally by drums. Konitz began playing stage right, completely off mike, appearing to be experimenting with the hall’s acoustics, and gradually moved to the center where his microphone was placed. His alto solo was brilliant: a twisting, turning, Mobius strip of colors and textures. Galper’s piano solo took the volume up a notch or two in an intense, pleonastic and rhythmically potent blast of energy before dropping back and leaving Johnson alone for a searching, introspective, rich-toned unaccompanied solo. Konitz eventually added his “voice,” comping like a pianist might, adding little asides and wry comments. The group remained at a very subdued volume level as the drums and piano came back in. Bishop took an understated unaccompanied solo that had a very nice flow to it and then the other instruments returned: interlocking, dovetailing, and moving in and out in unexpected ways. At this point there may have been a segue to another tune that kicked off with an amazing alto solo filled to the brim with audacious, beautiful and logical melodic lines. There was also a nice piano solo that neatly balanced strong chordal work with spiraling, bright, brittle single-note lines. Then came another low-key bass solo with more alto comments as it progressed. The sotto voce ending was sublime.

The next portion began with an unaccompanied bass solo, later joined by drums and piano. This piece had a Tristano feel in the surging rhythms, which eventually coalesced at a torrid up-tempo pace. During this piece Konitz used a handkerchief in the bell of his horn as a mute – as he did at several other points in the set – while engaging in a dialogue with Galper. The gauzy, vaporous timbre elicited by this technique was a stunning contrast to how he sounded un-muted. This piece ended with a humorous “get the last word in” sort of coda.

Bishop’s subtlety and subdued strength as a percussionist were obvious in his unaccompanied intro to the penultimate piece, which was packed with splintered Latin rhythms and sort of a push-and-pull feeling. All four members of this group are real listeners. That’s a trait that should be a given in a music as purportedly in-the-moment as is jazz, but it’s more rare than one might imagine.

The concert closed with a lucid, wonderfully imaginative piano/alto duo. Or, as Konitz introduced it with a radiant smile and a chuckle, a “Jew-oh.” Particularly with his own groups, Galper can often be a prolix player. With Konitz he tends to leave more space. To quote Larry Kart – one of the most insightful of jazz critics – again regarding Konitz: “…silence plays a special role. Not just the rhythmically expressive silence of rests, although Konitz, like Louis Armstrong and Charlie Parker, punctuates his lines with masterly skill, but the blank slate of nonmusic, on which all sounds must be written. No matter how lyrical a Konitz solo may be and no matter how naturally it unfolds, one senses that, more than any jazz musician of comparable skill, he is often on the brink of surrendering to the impulse not to play – as though the blankness of the blank slate were so real to him that he ‘writes’ upon it with some reluctance. And that gives his music a unique aura of honesty and strength, for what does emerge from Konitz’s horn already has been subjected to tests more strenuous than those any listener is likely to apply.”

* * *
Note: Quotes are from Jazz in Search of Itself by Larry Kart ©2004 Yale University Press, New York and London.