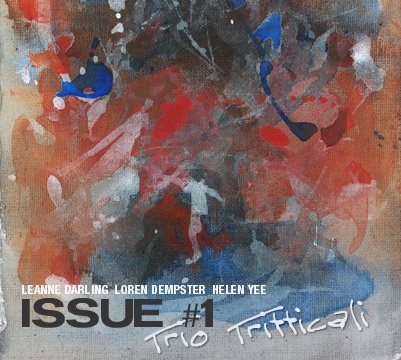 Multikulti jazz is hardly a new phenomenon, but here is a group that speaks in a collective voice that is brave and sly and remarkably its own. Issue #1, the debut recording of the genre-bending, all-strings Trio Tritticali, offers us music so fresh, assured, and unique, to register as a delightful surprise.

Trio Tritticali is the joint project of three virtuosi, Helen Yee, a Yale-trained wide-ranging violin dynamo (and throat singer), Leanne Darling, a violist with particular affinities for Arabic music and electronic looping, and Loren Kiyoshi Dempster, a University of Washington-trained cellist of “world music” sympathies, who also plays the didgeridoo, sometimes in tandem with his father, the UW trombone guru, Stuart Dempster. That such iconoclasts choose to so subsume their strong individual identities to a unified group sound is remarkable.

Strings-only jazz, an outlier to American tradition, originated overseas (with the thirties Django/Grappelli chug-chug-chug Quintet of the Hot Club of France), so little wonder at this New York-based group’s name, or musical globe-hopping. But, while forging a complicated identity, outdistancing previous categories, Tritticali is a unit that was gigging together for four years before recording, and by now their playing displays the unity of purpose of the finest string quartets. Their sound is comfortable, organic, cohesive, and insidiously thrilling.

Pardon the pun, but Trio Tritticali finds no need to be high-strung. They dig in, certainly, and don’t stint on passion, but on their own chosen terms. How refreshing – a new recording that answers mostly to itself. Over and over, they display absolute mutual trust and unity of purpose. Their arrangements are surprisingly complex, time-defyingly pensive here, propulsive or gamboling there, moments that prove that they have learned their Philip Glass lessons.

Trio Tritticali is both daring and conversational, a fascinating combination. They traffic in sensual release, but in the context of formal restraint. Their CD matches band originals and arrangements to Jobim’s Corcovado and Oliver Nelson’s Stolen Moments, visiting Argentine tango and keening Near Eastern mysteries, along with evocations of traditional Japan and other ports of call. Sometimes redolent of the hippest of salons, the music finds time to swing, while telling one
overall, sly, knowing story.

Throughout Issue #1, there is an ongoing sense that the listener is being invited to share a passel of musical secrets, many with implications that only reveal themselves over time. So, as a trio of stringed companions explore old traditions along new pathways, this is an invitation I would advise the world to accept.