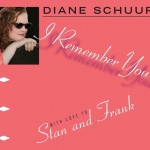 Also on this week’s Jazz Northwest is another former Seattle singer with a new CD, Dee Daniels, plus Collier & Dean, Ann Reynolds, Greg Williamson, and new music from Portland and Vancouver BC.

Jazz Northwest is recorded and produced by Jim Wilke for KPLU and is heard Sunday afternoons at 2 on 88.5 KPLU and kplu.org . A podcast of the program is also available following the broadcast.