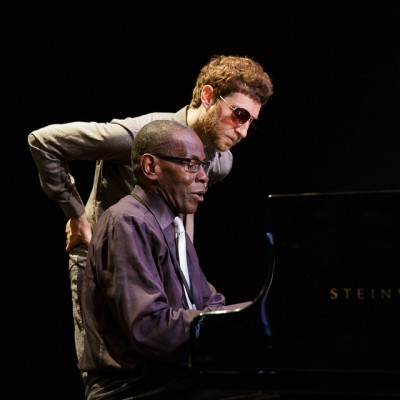 Pianist and composer George Cables was celebrated in a special concert at Centrum’s Jazz Port Townsend last July, and the concert was recorded for broadcast and will air Sunday, September 14 on Jazz Northwest on 88.5 KPLU. A perennial favorite at the festival and the Jazz Workshop each summer, George Cables teaches students, plays trio jazz in the clubs and often appears on the festival mainstage where this concert was recorded. Three pianists, Geoffrey Keezer, Benny Green and Dawn Clement take solo turns playing compositions by George Cables, and guitarist Anthony Wilson also contributes a piece associated with George Cables. The program ends with the master pianist playing one of his own compositions.

George Cables honed his craft as a sideman before beginning his own career as a leader and soloist. Among the many influential leaders he played with are Sonny Rollins, Joe Henderson, Bobby Hutcherson, Freddie Hubbard, Woody Shaw, and perhaps most notably Dexter Gordon and Art Pepper. He has recorded on dozens of albums and CDs, the most recent being his own Icons and Influences (HighNote).

Jazz Northwest is recorded and produced by Jim Wilke exclusively for 88.5 KPLU. The program airs and streams Sundays at 2 PM Pacific and is also available as a podcast at kplu.org.