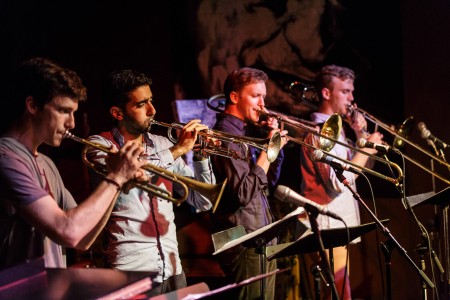 TERRY GROSS, HOST: This is FRESH AIR. The Westerlies is a quartet of young New York brass players, who know each other from school days in Seattle. Their debut album is a set of pieces by Seattle-based composer and improviser Wayne Horvitz. Jazz critic Kevin Whitehead says Horvitz and The Westerlies are a perfect fit.

KEVIN WHITEHEAD, BYLINE: Since Wayne Horvitz left New York for Seattle in 1989, he’s burrowed deep into the city’s musical life. He composes for the theater, for classical ensembles and his own improvising bands, and he runs his own club. He’s taught and mentored and hired lots of younger musicians, including the future members of the two trumpet, two trombone quartet The Westerlies. During that band’s second year together, Horvitz asked if they might be interested in recording some of his music, though none of it was written for brass. They were interested.

(SOUNDBITE OF THE WESTERLIES SONG, “HOME”)

WHITEHEAD: Trumpeter Riley Mulherkar on “Home” from The Westerlies’ album “Wish The Children Would Come On Home: The Music Of Wayne Horvitz.” His pieces may carry a strong whiff of folksy Americana, sometimes in a subdued minor key. Some short tunes are built on just a shapely phrase or two. Horvitz calls them miniatures with places for improvisations.

WHITEHEAD: The Westerlies play this music clean as a whistle, with attention to detail born of long rehearsals. And they infuse the lyrical passages with deep feeling. Wayne Horvitz’s “The Band With Muddy” was written for strings and woodwinds. But it has more punch transferred to brass.

(SOUNDBITE OF THE WESTERLIES SONG, “BAND OF MUDDY)

WHITEHEAD: Back in the 1980s, Wayne Horvitz had a rare knack for making digital synthesizer sound warm and human. The Westerlies had the good sense to have him sit in on one of those miniatures “I Wish The Children Would Come On Home.” Horvitz’s synthesizer wails like a spaghetti Western harmonica on an older version.

(SOUNDBITE OF THE WESTERLIES SONG, “I WISH THE CHILDREN WOULD COME ON HOME”)

WHITEHEAD: Wayne Horvitz also plays synthesizer on three brief interludes. You might almost wish the composer had joined in more often, but The Westerlies can sound like they’re using electronics even though they don’t.

WHITEHEAD: There are a few such echoes here of riffing minimalism, another music built on the cumulative power of simple riffs. It’s part of the mix alongside jazz, chamber music, small-town brass bands and garage rock. The Westerlies represent a breed of musicians rare when Wayne Horvitz was coming up, skilled interpreters who are also adept improvisers. With such versatile and well-equipped performers around, composers can expand their reach and they may all wind up in places they might not have found on their own.

GROSS: Kevin Whitehead writes for Point of Departure and Wondering Sound and is the author of “Why Jazz?” He reviewed The Westerlies’ “Wish The children Would Come On Home: The Music Of Wayne Horvitz,” on the Songlines label.