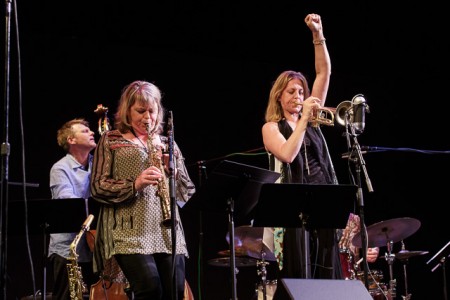 Sisters Ingrid and Christine Jensen were reunited in concert at Centrum’s Jazz port Townsend in July. Their concert at McCurdy Pavilion was recorded for Jazz Northwest and will be broadcast on Sunday, August 17 at 2 PM Pacific on 88.5, KPLU. The sisters grew up in Nanaimo, BC and have gone on to successful musical careers. Christine Jensen now lives in Montreal where she composes for and leads her own jazz orchestra. Ingrid is based in New York and leads her own groups and plays with the Maria Schneider Orchestra and other ensembles. Both have recorded numerous CDs and tour internationally.

Backing The Jensens in this concert are three stars in their own right… Pianist Geoffrey Keezer, bassist Martin Wind and drummer Jon Wikan. The concert features mostly original compositions by Ingrid and Christine Jensen.

Jazz Northwest is recorded and produced by Jim Wilke, exclusively for 88.5 KPLU and airs Sundays at 2 PM Pacific and streams at kplu.org. The program is also available as a streaming podcast after the broadcast.