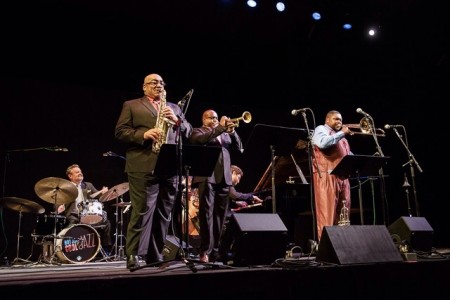 Trombonist Wycliffe Gordon & Friends’ Jazz Port Townsend concert airs this Sunday, August 3 on Jazz Northwest at 2 PM Pacific on 88.5 KPLU. The popular and critically acclaimed brass player (he plays several brass instruments) was recently named top trombonist by the DownBeat Critics Poll for the third year in a row and top trombonist by the Jazz Journalists Association. He first came to wide attention as a member of the Wynton Marsalis ensemble but has since branched out in several directions including new styles and various brass instruments. He is a master of the plunger mute trombone (seen above). He has led over two dozen record dates and is on the faculty of Manhattan School of Music.

Joining Wycliffe Gordon on stage for this concert in the 1200 seat McCurdy Pavillion at Fort Worden are Jeff Clayton, alto sax, Terrell Stafford, trumpet, Benny Green, piano, John Clayton, bass, and Jeff Hamilton on drums. Every member of this group is also a band leader in his own right, so it is truly an all-star group. The concert is mostly original blues-based music by Wycliffe Gordon, and all totally soulful and in the pocket for this group of friends.

Thanks to the musicians, John Clayton, Gregg Miller and the staff at Centrum, and special thanks to Rick Chin and Neville Pearsall who provided house sound and assisted with recording this concert. Jazz Northwest is recorded and produced by Jim Wilke exclusively for 88.5 KPLU. The program airs Sundays at 2 PM Pacific on 88.5, KPLU and streams at kplu.org. The program is also available as a streaming podcast at kplu.org following the broadcast.