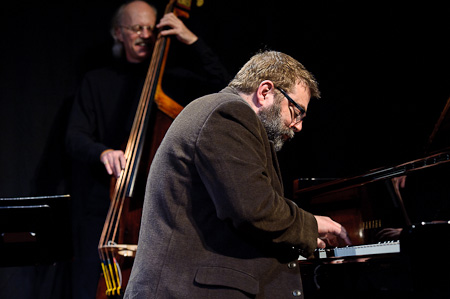 Of the many distinctive jazz musicians who came up on Seattle’s fertile 1980s scene, pianist Dave Peck — who’s got two nights at Tula’s Friday and Saturday, May 16-17 — has distinguished himself by continually refining his craft.

Firmly ensconced in the lyrical school running from Bill Evans to Keith Jarrett — and sharing their technical mastery, which makes lickety-split execution seem effortless — Peck plays pretty and swings, too, digging deeply for the sweetest notes and coming back up with surging, honest emotions.

Peck grew up in Oregon, but came into his own here, where for many years he taught at the Cornish College for Arts. He is one of the few musicians from the Emerald City to have appeared on “Marian McPartland’s Piano Jazz,” where he impressed the great hostess — no pushover — enough that she praised his “great musicality” and “sensitive touch.”

Peck worked as a sideman for a long time, most notably with the late saxophonist Bud Shank, who once put on a whole concert and then recorded an album devoted to Peck’s considerably attractive compositions, work that tends to highlight the pastoral nature of our surroundings here in the Northwest.

Continue reading at The Seattle Times