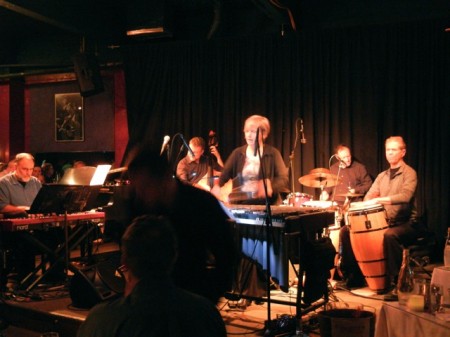 Vibist Susan Pascal is a versatile musician who leads her ensembles in a variety of music. On previous appearances on Jazz Northwest she has played the music of The Modern Jazz Quartet at Seattle Art Museum and led a Standards Quintet at Tula’s. Recently she brought her “Soul Sauce” Quintet to Tula’s to play the music of the Latin jazz vibist Cal Tjader. Highlights from the performance last month at Tula’s will air on Jazz Northwest, Sunday, April 6 at 2 PM Pacific on 88.5 KPLU.

The music includes mambo, cha-cha, boleros and other forms, in music popularized by vibist Cal Tjader who worked with Dave Brubeck (as a drummer) and George Shearing (as a vibist) before leading his own groups from 1954 until his death in 1982. Among Latin percussionists who were featured with Tjader are Mongo Santamaria and Poncho Sanchez. Susan Pascal’s quintet uses the same instrumentation as Tjader’s quintets, with Fred Hoadley on piano, Chuck Deardorf on bass, Mark Ivester on drums and Tom Bergerson on percussion.

Jazz Northwest is recorded and produced by Jim Wilke exclusively for 88.5 KPLU and it airs each Sunday at 2 PM Pacific. The program is also streamed live at kplu.org and is available as a podcast after the broadcast.

The next live-on-location Jazz Northwest will feature singer Kendra Shank and guitarist John Stowell in an intimate duo concert presented by Earshot Jazz at The Seattle Art Museum. The concert is at 5:30 on Thursday, April 10 and the broadcast will be on April 20.