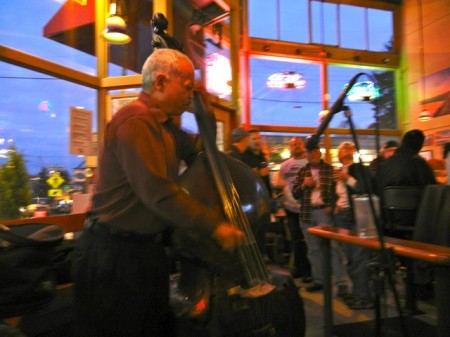 Phil Sparks is one of the Seattle area’s most popular jazz bass players, and every Friday afternoon he leads a hand-picked jazz trio for an informal session at The Latona Pub during Happy Hour from 5 to 7. Most of Seattle’s top players have played here with Phil Sparks, and the personnel changes from week to week. It’s crowded, it’s noisy, but it IS happy and the nearest listeners are drawn in to the energetic but acoustic music. Generally, it’s SRO Fridays at the popular pub at 65th and Latona near Green Lake in Seattle.

The trio sets up in the front window, little more than an arm’s reach from the bar. The musicians come from Phil Sparks’ many musical associations. Sometimes there are out-of-town guests like the recent visit from saxophonist Rob Scheps, formerly of Portland now in New York, who was just returning from Hawaii after a cross-country series of performances with local musicians at each stop. The drummer is D’Vonne Lewis who is carrying on the Seattle musical legacy of his grandfather Dave Lewis.

Jazz Northwest is recorded and produced by Jim Wilke exclusively for 88.5 KPLU. The program airs Sundays at 2 PM (Pacific) and is available as a podcast at kplu.org following the broadcast. Next week: excerpts from a concert by Steve Griggs and his Panama Hotel Jazz Quintet recorded at The Seattle Art Museum.

Read Earshot’s story about Phil’s gig at The Latona