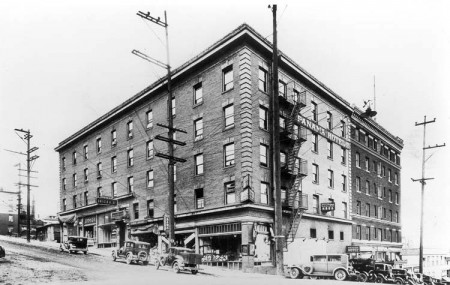 The Panama Hotel is more than a century old and it still operates today in what was known as Japan Town, between China Town and the historic Jackson Street district in Seattle. Jamie Ford’s novel, Hotel on the Corner of Bitter and Sweet captures the World War II era when the hotel became a focal point for the Japanese community, when Japanese Americans were being forceably removed from coastal areas and sent to inland internment camps. The hotel and the novel are also at the cultural intersection of the International District and the lively Jackson Street “After Hours” period of jazz and entertainment clubs.

Steve Griggs composed Panama Hotel Jazz – a suite of music reflecting the era of the novel, the hopes and fears, the wartime hysteria, and racism that caused Americans of Japanese descent to be seen as potential threats and taken from the place where many were born and grew up. The suite was first presented last Fall in a series of concerts at The Panama Hotel, funded by a 4Culture Site Specific Grant.

Panama Hotel Jazz was presented again this month as part of the Art of Jazz series at The Seattle Art Museum, coordinated by Earshot Jazz. Excerpts from this concert will be heard on Jazz Northwest, Sunday February 23 at 2 PM Pacific on 88.5 KPLU. The music is performed by Steve Griggs, tenor saxophone and narrator, Jay Thomas, trumpet and flugelhorn, Susan Pascal, vibraharp, Milo Petersen, guitar and Phil Sparks, bass.

Jazz Northwest is recorded and produced by Jim Wilke, exclusively for 88.5 KPLU. The program is also available as a podcast following the broadcast at kplu.org. The next concert broadcast on Jazz Northwest will feature the Seattle Repertory Jazz Orchestra in Duke Ellington’s “Such Sweet Thunder” a suite inspired by characters from Shakespeare, interspersed with readings by actors from The Seattle Shakespeare Company on March 9 at 2 PM on 88.5 KPLU.