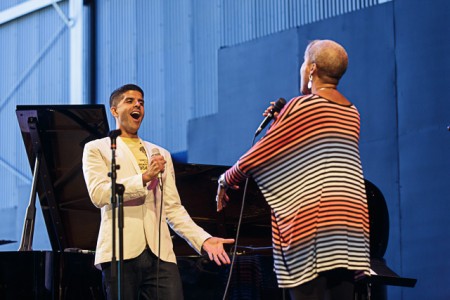 Two excellent jazz singers, René Marie and Sachal Vasandani team up in concert on the next Jazz Northwest broadcast from Centrum’s Jazz Port Townsend, held the last weekend of July each summer.  The concert will air on Sunday, September 15 at 2 PM Pacific on 88.5 KPLU.  It was recorded before a large audience in McCurdy Pavilion at Fort Worden during the Festival.  The two singers, obviously enjoying each other, trade songs and join in some duets.   They were accompanied by an all-star rhythm section of George Cables (piano), Chuck Deardorf (bass) and Joe LaBarbera (drums).

René Marie didn’t fully commit to become a professional singer/songwriter until she was in her 40s, but since then has recorded a dozen CDs featuring her unique songs and interpretations of standards.  Sachal Vasandani is one of the few male jazz vocalists to appear on the scene in the last decade and has recorded 3 CDs which have been well received.  Both artists tour world wide and were making repeat appearances at Jazz Port Townsend.  They also served on the faculty of the Jazz Workshop which precedes the Festival.

Jazz Northwest is recorded and produced by Jim Wilke, exclusively for 88.5 KPLU.  The program airs at 2 PM Pacific on Sundays and is also available as a streaming podcast at kplu.org following the broadcast.