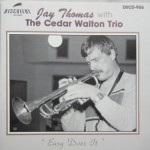 This week on Jazz Northwest we’ll remember some of the influence the late Cedar Walton had on Seattle musicians. He played Seattle jazz clubs like Parnell’s and Jazz Alley, did workshops at Cornish College and arranged and played on Jay Thomas’ first album. We’ll hear a young Jay Thomas playing with the seasoned Cedar Walton Trio in 1984, and Cedar Walton’s tune “Bolivia” played in concert by Chris Amemiya & Jazz Coalescence issued this year.

New music from Vancouver and Portland too on this week’s show, plus Latin jazz with Lary Barrileau, and Cuong Vu 4-tet on Jazz Northwest, Sunday at 2 on 88.5, KPLU.

Next week (9/1), the Centrum All Star Big Band plays music by former Seattle resident Quincy Jones, conducted by Clarence Acox at Jazz Port Townsend. Truly an all -star band, it includes top soloists from around the US including the Pacific NW.