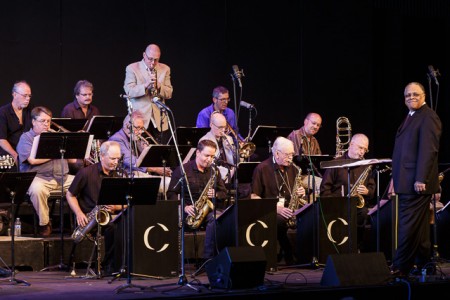 The Centrum All-Star Big Band directed by Clarence Acox played a Salute to Quincy Jones at Jazz Port Townsend last July, and Jazz Northwest was there to record the concert. The full-length concert broadcast will air on Sunday, September 1 at 2 pm (PDT) as part of a series of live concert recordings from this year’s festival.

Quincy Jones grew up in Seattle and attended Garfield High School. He got his first big band experience in Seattle, and it’s fitting that this Salute to Quincy Jones is directed by Clarence Acox, who has directed the multi-awarding winning jazz band program at Garfield High School for 35 years. He is also a professional drummer and co-director of the Seattle Repertory Jazz Orchestra with Michael Brockman. Many musicians in this concert have played in both bands.

Selections by Quincy Jones include the Theme from Golden Boy, Stockholm Sweetnin’, The Midnight Sun Will Never Set, Quintessence and others.

Jazz Northwest is recorded and produced by Jim Wilke, exclusively for 88.5 KPLU. The program is also available as a podcast at kplu.org following the broadcast. Next concert in the series will feature René Marie and Sachal Vasandani on September 15.