from The Seattle Times Blog: 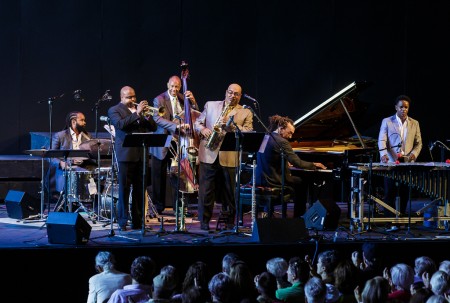 Up first was the Clayton Brothers band — more accurately the Clayton family band, since it featured not only festival artistic director and bassist John Clayton and his brother, alto saxophonist Jeff, but John’s fiery, dredlock-bedecked son, Gerald, who plays piano. This was essentially the same sextet that tore up the Public House in Port Townsend Friday, with the difference that John Clayton replaced Joe Sanders and that the group played a prepared set, including a world premiere.

With Terrell Stafford on trumpet, Stefon Harris on vibes and Obed Calvaire on drums, the band had firepower to spare, and they took no prisoners in a set characterized by thick textures, high pressure, sizzling cross-rhythms, soulful swing and a refreshing variety of tempos, instrumentation and solo order. On the opening tune, a rhythmically tricky original by Jeff Clayton titled “Cha Cha Charleston,” Stafford let fly a bravura circus of high notes and muscular, percussive phrases, then continued to outdo himself all afternoon. Jeff, whose girth and mustache recall Fats Waller, mugged with minty surprise at Stafford’s virtuosity, one arm akimbo, as if to say, “Get a load of that!”

Continue reading at The Seattle Times