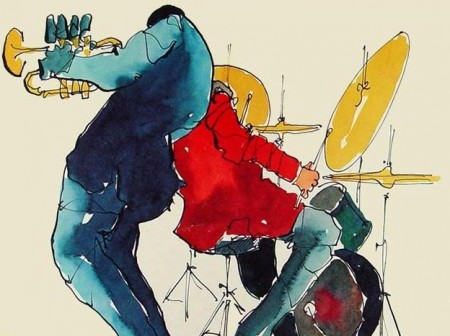 Thad Jones played trumpet with the Basie Band and he brought the jazz orchestra into the modern age with his unique compositions and arrangements for the Thad Jones-Mel Lewis Jazz Orchestra at The Village Vanguard.  The current incarnation of that orchestra still plays every Monday night at the hallowed New York club as The Vanguard Jazz Orchestra 47 years after it began.   The music of Thad Jones still feels current and is played by jazz orchestras around the world, including The Seattle Repertory Jazz Orchestra which featured Thad Jones’ music in two sold out concerts last weekend.

Highlights from one of those concerts will air on Jazz Northwest Sunday, March 10 on 88.5, KPLU and kplu.org.  The concert was recorded at The Kirkland Performance Center.  Included are several selections that have become jazz standards, Three in One,  A Child is Born, To You and Low Down.  Among the many soloists in this concert are two who performed with Thad Jones or the Vanguard Jazz Orchestra, Bill Ramsay and Mark Taylor.

This concert was one of the current series of concerts by the Seattle Repertory Jazz Orchestra, directed by Clarence Acox and Michael Brockman.  The next concert pair will be Jazz of the Harlem Renaissance III: Ellington’s “Reminiscing in Tempo” on April 13 and 14.

Jazz Northwest is heard every Sunday afternoon at 2 PM Pacific on KPLU.  The program is recorded and produced by Jim Wilke, exclusively for 88.5, KPLU.  A podcast is available after the broadcast at kplu.org.   Coming in the near future are concerts by the Bernie Jacobs Quartet at Seattle Art Museum (3/24) and “Just The Two of Us” with guitarists Kevin Eubanks and Stanley Jordan at Kirkland Performance Center (4/7).

Preview the episode below.