ON THE SCENE WITH HOWARD LONDNER 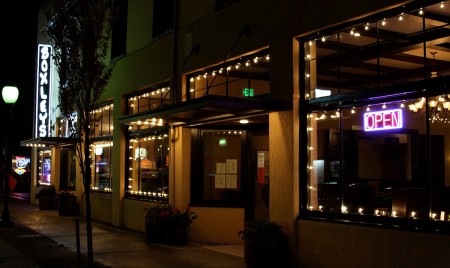 Boxley’s is a vanguard for jazz in the village of North Bend. It’s owner, Danny Kolke, leads a trio on Sunday nights. On Wednesday nights the local middle and high schoolers perform, The Future Jazzheads.  Never a cover. Good food, good drinks, friendly and attentive staff. Danny always wants you to have a good dinner and hear great music.

This quartet played two sets. The only things I disliked was the balance the first set, it was hard to hear the vocals, and Ms Page didn’t do any scat singing. What I like about scat singing is it frees the singer up, allows him or her to improvise outside the lyrics, and then they can really show their stuff. The more a singer does it, the more I like it.

I once heard another vocalist in the Seattle area describe Ms Page’s singing and presentation as “charming”. She is my second favorite singer in the Northwest after Johnaye Kendrick. Her voice is beautiful. Very lyrical, a high range. I’ve heard her sing “Body and Soul” before in a more traditional mournful sort of way.  Tonight she picked up the tempo and put a little edge on it. Cool. Which one do I like better? I don’t know, both great in their own way. Next song, “Bye bye Blackbird” also had some edge thrown in. Cool again.

Darin Clendenin played good. Good solos, and accompanied Diana beautifully. Nate Parker is a real steady cat. His bass is big and bold. His solos are like a pitcher throwing a bunch of well located fastballs, and then, a breaking ball, just enough to keep it interesting, making sure you better pay attention. Greg  Williamson was on the money as usual, really good fills.

Danny Kolke sat in the last couple songs on piano, playing well. Ms Page sat
down for one song as Kelly Eisenhower came up and sang a room owning blues.

I came to hear these cats play. I wasn’t going to write about them since I already did when they played at the Eastside Jazz Club. They played better than they did previously, and I figured I better tell you about it.

These are great musicians, always playing great. Eric Verlinde was especially killer, with his solos he kept putting on layer after layer of different textures and colors. On some of the ballads his touch was exquisite. All the cats’ notes were distinct, clear, potent or soulful, even Greg’s brushes (I’ll say it again, I think his playing with brushes is as good as anybody’s. I think it’s pretty hard to get distinct notes with brushes.). Tom Marriott wowed the crowd when they played “I remember Clifford”. Mark  Taylor played another great “Body and Soul”. He also had an interesting interaction with Phil’s bass. The two instruments exchanging ideas. Conversing. They played two sets. Danny Kolke sat in at the piano to finish both sets. He, too, played well.