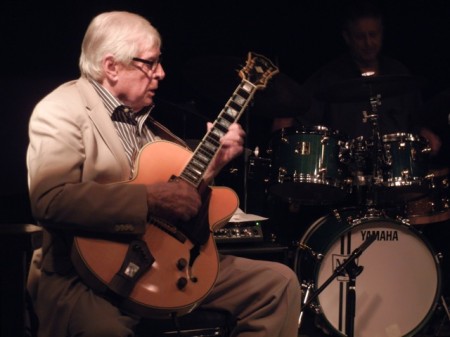 Guitarist Mundell Lowe played with Charlie Parker, Lester Young, and Billie Holiday among others, was a long-time staff musician at NBC and CBS in New York before moving West to write and play for movies, TV and recording studios. The 90 year old guitarist was in Seattle last Fall to play in a two-guitar quartet with Mike Magnelli during the Earshot Festival. Two Seattle musicians, Chuck Kistler on bass and Milo Petersen on drums, joined the two guitarists for two nights at Tula’s  during the festival, and they recorded for Jazz Northwest on the second night.  Highlights from that performance at Tula’s will air on Sunday, January 6 at 2 PM Pacific on 88.5 KPLU and stream at kplu.org.

Jazz Northwest is recorded and produced by Jim Wilke exclusively for 88.5 KPLU.  The program airs Sundays at 2 PM and is available as streaming podcast after the broadcast.