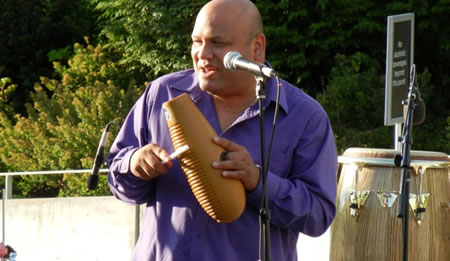 Carlos Cascante and Tumbao played this month’s Seattle Art Museum Art of Jazz concert outdoors at the Olympic Sculpture Park by Elliott Bay.  A large crowd and lots of dancers joined the celebration in the Seattle sunshine.  Highlights from the concert will air on Jazz Northwest on 88.5, KPLU on Sunday, August 19 at 1 PM PDT.

Tumbao is a six-member Latin Jazz group playing music of Central and South America and the Caribbean and was formed about ten years ago in Seattle.  The group includes musicians from Costa Rica, Mexico, and Peru as well as the US.  The group has two CDs and performs frequently around the Pacific Northwest.

The Art of Jazz Series is presented on the second Thursday of each month at The Seattle Art Museum, and outdoors at The Olympic Sculpture Park on Elliott Bay during Summer months.  Next month’s concert will feature Wellstone Conspiracy on September 13, returning to the downtown Seattle Art Museum. The series is coordinated by John Gilbreath of Earshot Jazz.

Jazz Northwest airs Sunday afternoons at 1 PDT and is recorded and produced by Jim Wilke, exclusively for 88.5 KPLU.  It is also available as a podcast from kplu.org following the air date.