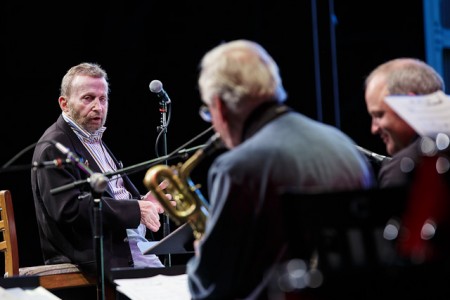 Johnny Mandel has enjoyed a seven-decade musical career that began in the 40s as a trombonist and arranger in big bands of Woody Herman, Count Basie and others.  He went on to greater fame as a film composer after settling in LA in the 50s, where he penned scores for “I Want To Live,” “The Sandpiper,” “The Americanization of Emily,” “Mash” and many others including popular songs “Close Enough for Love” and “A Time for Love”.

This July at Centrum’s Jazz Port Townsend, the All-Star Big Band played a concert of The Music of Johnny Mandel, conducted by the composer and including nine of his best-known and celebrated compositions.  The 18 member band includes many individual soloists who are bandleaders and recording artists in their own right.  It’s with great pleasure and privilege we’re able to present this unique concert by a living legend, the Grammy-winning and NEA Jazz Master, Johnny Mandel.

Jazz Northwest is recorded and produced for radio by Jim Wilke, exclusively for 88.5 KPLU and kplu.org.  The program is heard each Sunday at 1 PM PDT and a podcast is available after the air date at kplu.org.