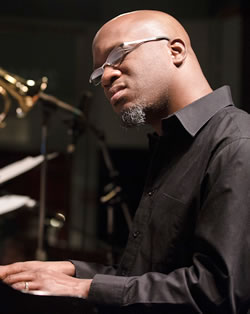 Jazz has always relied on the commitment of grass-roots activist-musicians. It would be hard to find two more committed souls in that department than drummers Matt Jorgensen and John Bishop who, with their feisty record label, Origin, produce the Ballard Jazz Festival, which opens Wednesday.

Fittingly, one of this year’s headliners is an activist-musician himself, the dynamic Philadelphia pianist Orrin Evans. Though Evans is a New York journeyman, he lives in Philly, where he nurtures the scene with such projects as the Captain Black Big Band, a group Down Beat magazine critics recently called a “rising star.”

“I try to be present,” said the pianist on the phone, as he drove from Philadelphia to a Manhattan gig, earlier this week. “I bring things back, from wherever I go, whether it’s New York or Japan, to keep adding to the scene.”

With Evans, as with Seattle jazzers, local pride runs deep. In talking about influences, he’s as likely to mention Philadelphia keyboard legends Trudy Pitts and Shirley Scott as Kenny Barron or Ralph Bowen, the teachers he encountered at Rutgers University’s Mason Gross School of the Arts.

Evans is also passionate about the African-American roots of jazz — he came up in the black church — which you can hear in his soulful swing and knotty, percussive attack, qualities that have earned him slots with Bobby Watson, Sean Jones, Branford Marsalis, Nicholas Payton and the Mingus Big Band.