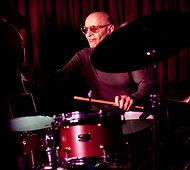 Paul Motian, a drummer, bandleader, and composer of grace and abstraction, and one of the most influential jazz musicians of the last 50 years, died early Tuesday morning at Mount Sinai Hospital in NewYork. He was 80 and lived in Manhattan.

The cause was complications of myelodisplastic syndrome, a bone-marrow disorder, said his friend, Carole d’Inverno Frisell.

Mr. Motian was a living connection to some of the groups of the past that informed what jazz sounds like today: he had been in Bill Evans’s great trio in the late 1950s and early 1960s, playing on the albums “Waltz for Debby” and “Sunday at the Village Vanguard,” and in Keith Jarrett’s American quartet during the 1970s. But it was in the second half of his life that Mr. Motian found himself as a composer and a bandleader, and his own work took off.

He worked steadily, and for the last six years or so almost entirely in Manhattan, with the support of the record producers Stefan Winter and Manfred Eicher, who streamed out his albums, and Lorraine Gordon of the Village Vanguard, who eventually booked his groups for up to four or five weeks per year.