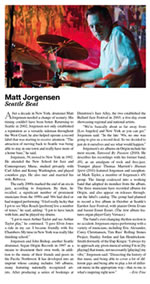 Seattle drummer Matt Jorgensen is featured in the Players section of the December issue of Downbeat magazine (with Trombone Shorty on the cover). The issue is currently on newsstands so pick up your copy before the month is out.

The story details Jorgensen’s time in New York, his move back to his hometown of Seattle, the start of Origin Records and some of his recent projects.

Returning to Seattle in 2002, Jorgensen not only established a reputation as a versatile sideman throughout the West Coast; he also helped operate a record label that was starting to receive attention. “The attraction of moving back to Seattle was being able to stay in one town and really have more of a home base,” he said.

… Jorgensen and John Bishop, another Seattle drummer, began Origin Records in 1997 as a means to document their own work, in addition to the music of their friends and peers in the Pacific Northwest. It has developed into an imprint whose catalog includes 340 albums, many featuring nationally recognized artists. After producing a series of bookings at Dimitriou’s Jazz Alley, the two established the Ballard Jazz Festival in 2003, a five-day event showcasing regional and national artists.

You can read the article online or pick up the December issue of DownBeat (and see the snazy color photo!)