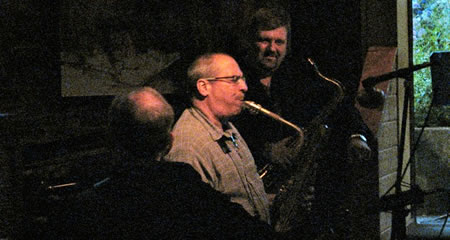 One of the features of Centrum’s annual Jazz Port Townsend is three nights of informal performances in small pubs and restaurants near the waterfront. These “Jazz In The Clubs” performances follow main stage concerts in McCurdy Pavilion and offer listeners and musicians a relaxed atmosphere for enjoying the informal interplay between world-renown musicians. One of these sessions is the focus on the next Jazz Northwest on 88.5 KPLU on Sunday, August 28 at 1 PM PDT.

This performance took place at The Upstage and brought together a bi-coastal group including saxophonists Gary Smulyan and Joel Frahm and drummer Alvester Garnett from the East Coast, and Bruce Forman, guitar, Tamir Hendelman, piano and Doug Miller, bass, from the West Coast. All were members of the faculty of the week-long Jazz Workshop which precedes the Festival on the last weekend of July. Each of the six musicians has numerous recording and touring credits and brings a wide variety of experience to this set which ranges from tender ballads to be-bop burners.

With no rehearsal beyond talking through the tunes and deciding on solo order during the gig, this is a great example of the magic spontaneity of jazz as the six musicians turn in a performance that sounds like they’ve been playing together for years. The audience surrounds the musicians on three sides and two levels, and no one is more than a few steps from the musicians making it a very participatory experience.

Jazz Northwest is recorded and produced by Jim Wilke exclusively for 88.5 KPLU and kplu.org. The program is streamed live to an international audience and is available as podcast at kplu.org following the airdate.