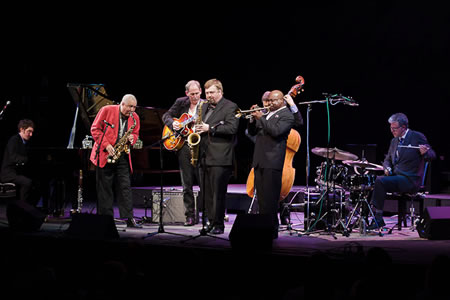 A stellar septet of jazz greats played at McCurdy Pavilion during Centrum’s Jazz Port Townsend 2011 the last weekend of July. Cuban-born, now American citizen Paquito D’Rivera was nominal leader and spokesman, playing alto sax and clarinet. He played alongside Dizzy Gillespie and other jazz greats who helped bring him to world-wide attention. Along with him were trumpeter Terell Stafford, tenor saxophonist Joel Frahm, guitarist Bruce Forman, pianist Benny Green, bassist Christoph Luty and drummer Matt Wilson. All are major jazz recording and touring stars with their own groups and/or with others.

The seven musicians had also been faculty members during the week-long jazz workshop which precedes the festival each year. After a week of sharing their knowledge and skills with students, they were ready for some fun themselves. They roared through several bebop classics by Dizzy Gillespie, Charlie Parker, Freddie Hubbard, Herbie Hancock and a gentle bossa nova by Jobim. The concert was recorded for broadcast and will air on Jazz Northwest on Sunday, August 7 at 1 PM PDT on 88.5 KPLU in Western Washington and stream live to the internet at kplu.org.

This concert is one of eight performances recorded at this year’s Jazz Port Townsend which will air over coming weeks on Jazz Northwest . The program is recorded and produced exclusively for KPLU by Jim Wilke and is also available as a podcast from kplu.org after the air date.