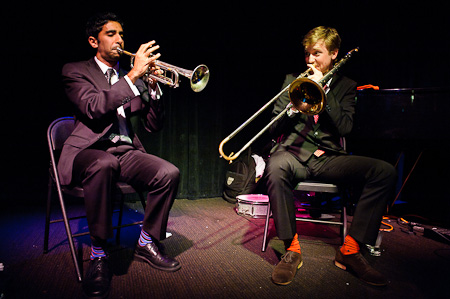 Bake’s Place recently announced the launch of the “Rising Stars” concert series, which showcases up and coming young musicians from the Pacific Northwest. The region is home to some of the most outstanding high school jazz programs in the nation and has long been the starting point for some of the brightest musicians breaking into the scene today. Although many of these artists are busy with their musical studies and blooming careers, Bake’s offers an open door and an opportunity to play when their travels bring them back to the area. “We are dedicated to supporting these exciting, young musicians,” say club owner Craig Baker.

The series kicks off this Friday with the Mulherkar-Clausen Quintet led by Juilliard classmates Riley Mulherkar and Andy Clausen.

Riley Mulherkar is a prodigy of the prestigious Garfield High School jazz program. Described by the New Yorker as a “brilliant teen-aged trumpeter,” Mulherkar is already making a name for himself. He has been recognized by Downbeat Magazine and also received the “Ella Fitzgerald Outstanding Soloist” award at the 2010 Essentially Ellington Competition in New York City. He has shared the stage with the likes of Wynton Marsalis, Benny Golson, Jimmy Heath, Paquito D’Rivera and Roy Hargrove and has performed nationally and internationally at such festivals as Umbria Jazz Festival, Jazz a Vienne, Lionel Hampton Jazz Festival and the Reno Jazz Festival. In August, Riley will be joining fellow Julliard students for a tour of Brazil as part of Julliard’s Student Outreach program. He will be performing in collaboration with other jazz musicians as well as actors and actresses.

Trombonist/composer Andy Clausen has enjoyed an equally impressive trajectory. He rose through the ranks of the acclaimed Roosevelt High School jazz program. At just 14 years of age, Andy was already writing original compositions and leading his own sextet, which played throughout the Seattle area. In 2009, he was named as the “Emerging Artist of the Year” by Earshot Jazz and in that same year, also won the Gerald Wilson Award for Jazz Composition from the Monterey Jazz Festival. The Andy Clausen Large Ensemble has also garnered high praise; the New York Times hailed the band as “sleek, dynamic large group jazz.”  Andy has performed in across the U.S. as well as in Italy, France, Austria, Slovenia and Croatia. His compositions have been performed by Winton Marsalis and recorded by Cuong Vu.

Riley and Andy recently completed their freshmen year at Juilliard and have joined forces to front their own quintet, which is presently touring throughout the Northwest. Rounding out the band are Gus Carns on piano, Mark Hunter on bass and D’Vonne Lewis on drums.

For this performance, dinner service starts at 6pm. Showtime is 7:45pm.  Reservations can be made by calling 425-391-3335 or by sending an email to [email protected]. Early reservations are highly recommended.