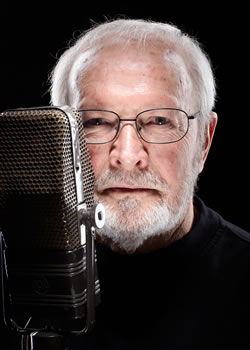 The best advice I’ve ever received is “you’re not talking to an audience of thousands, you’re talking to thousands of audiences of one or two.”

When I was 14 I was playing alto sax in concert band and listening to Western Swing on the radio during the day and jazz late at night .

Broadcasting jazz has meant introducing others to some of the most creative musicians who ever lived.

If I could do it all over again, I probably wouldn’t change much.

My voice is who I am.

When I look at where I’m at right now, I feel very lucky to make a living around the music I love.

The piece of music that always resonates with me is – well, can I mention two songs? “You Must Believe in Spring” and “With Every Breath I Take”….or anything by Johnny Mandel who I regard as the Schubert of American songwriters.

I see my role in Jazz as a bridge between artist and audience.

My parents were Iowa Farmers who made me feel grounded in more than one sense of the word.

Fear is to be challenged, dared.

Motivation is a deadline – (I know that’s not original but it’s true for me!)

As I get older, I’ve realized that there’s less time than I thought.

In the big scheme of things, what really matters is doing what you believe in.

I cried when Father’s Day came a week after my Dad died.

Music has taught me another language, like Spanish or French.

People always ask me what I like among recent jazz CDs.

Discovering a new artist or recording is like meeting an intriguing person you know is going to become a friend.

Discipline is very difficult for me.

Change is welcome as long as it improves on the past.

When I learned music, I chose the alto saxophone because my family had one. My sister and brother had each played it before me.

I’ve never understood the appeal of songs with three chords or fewer.

Improvisation is like conversation. No one writes down or memorizes what they’re going to say in a conversation.

Less is more because it’s easier to grasp.

More is more because sometimes it’s good to be overwhelmed.

The thing that makes me nervous when recording a show is unexplained extraneous noise, and not seeing anything moving – like a turntable or tape reels.

If I could have made a career on an instrument, it would have been the guitar.

Some musicians don’t seem to understand, some music works better in concert than on the radio, and vice versa.

Your audience is like a group of friends who have similar tastes and interests.

I’m happy whenever I’m listening to Dizzy or Duke, or Sarah.

I view my greatest achievement to be live broadcasts with Duke Ellington, Dizzy Gillespie, Woody Herman, the MJQ, Coltrane, Oscar Peterson, Stan Getz and many others. Also the opportunity to turn people on to some of the great talent living here and playing now.

The future of jazz is to evolve and build on the past, not relive it.

A sense of humor is important because without it, one might take oneself too seriously.