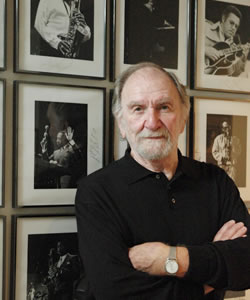 The life of longtime Seattle resident and internationally known jazz photographer Ron Hudson will be celebrated with a night of music and photography at Jazz Alley on Monday, April 11. Musical guests will include the Roosevelt Jazz Band and many members of the Seattle jazz community. The program begins at 7:30pm.

From such legends as Count Basie to Woody Herman, Miles Davis, Dizzy Gillespie, Sarah Vaughn and Ella Fitzgerald, and the young lions such as Stefon Harris, Joshua Redmond, Christian McBride and Regina Carter, Ron Hudson has “sat in’’ with the best of them, recording their performance images on black & white film.

Hudson’s work is featured in four major books: Monterey Jazz Festival: Forty Legendary Years (with forward by Clint Eastwood) as well as A Paradise called Pebble Beach by author Ray March, A life in the Golden Age of Jazz, A Biography of Buddy DeFranco. and most recently Take Five, the public and private lives of Paul Desmond by Doug Ramsey.

Hudson was an advocate for jazz education. If you wish to honor his memory, donations can be made to: