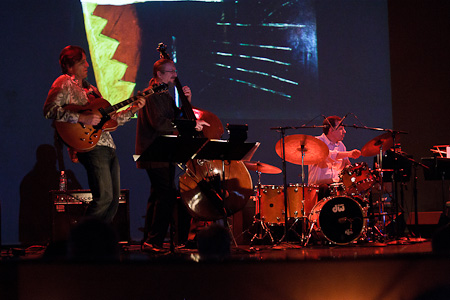 Matt Jorgensen is a very busy man. A drummer and composer, he plays and records with a wide variety of musicians, including his own long-running quartet 451 and popular trumpeter and label-mate Thomas Marriott. Jorgensen also co-manages the Origin Records label, a thriving concern that has released over 300 discs since 1997, and that now encompasses two associated labels, OA2 and Origin Classical.

He is also a family man, and it’s a family connection that provided the spark for his impressive and well-received new Origin record, Tattooed By Passion: Music Inspired By The Paintings of Dale Chisman (2010). The well-known Denver artist Dale Chisman, who passed away in 2008, was Jorgensen’s father-in-law, and his paintings and views on art and the artist have been a strong inspiration to the composer.

Most of the original tunes on the new album, which reached the top 30 on the Jazz Week radio chart, are inspired by and titled after particular paintings of Chisman, which are reproduced on the cover and in the booklet of the CD. The music generated by Jorgensen and band mates Marriott, saxophonist Mark Taylor, guitarist Corey Christiansen and bassist Dave Captein, is, by turns, driving, groove-heavy, expressive,and, especially on the three tracks with string accompaniment, poignant with the sense of both loss and hope.

All About Jazz: To start with, let me say that I am enjoying Tattooed By Passion immensely. I think it’s one of the more impressive new records I’ve heard in a long time.

Matt Jorgensen: Thanks. I recently got back from Denver where we had the opening of the Dale Chisman In Retrospect show.

Continue reading at All About Jazz.