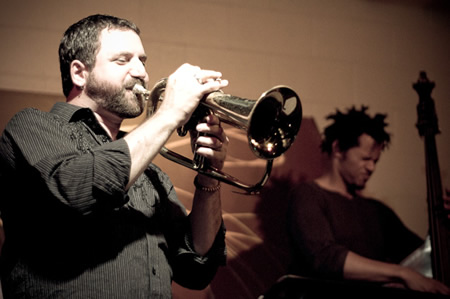 Trumpeter Jason Parker has been working on a new CD, Five Leaves Left: A Jazz Tribute To Nick Drake, and he will be performing the music live at Lucid Jazz Lounge before heading into the studio.

For this album project Parker has reached out to his fans and friends to help cover the cost of recording by launching a KickStarter campaign. Through KickStarter’s website fans are able to pledge support to the project and help the group meet their fundraising goal. With 10 days left, Parker’s new CD is almost 70% funded. For more information about the Five Leaves Left KickStarter campaign, click here.

Last Friday night at Bake’s Place in Issaquah was another exquisite evening of stellar jazz, especially with the great Barney McClure in the house! He brought in his own vintage B3 Hammond organ, and as Bake’s owner Craig Baker said, “He plays it how it’s supposed to be played”. Barney was at his smokin’ best belting out blazing hot runs and punctuating groovin’ chords and sustained notes with aplomb to augment the fabulous rhythm section comprised of local standouts Jose Martinez on drums and Chris Spencer playing electric guitar.

As if this group of extraordinary musicians wasn’t enough, the stage was also graced by the incomparable Greta Matassa who brought the house down with her powerhouse vocals and irresistible charisma. She sang a variety of styles from smoldering blues numbers to lush standards as “Like Someone in Love” and Shirley Horn’s “I could have told you so”. Greta also paid tribute to the wonderful vocalist/songwriter Blossom Dearie with her rendition of “Now At Last” and pulled out all the stops with a cookin’ Ray Charles tune “Danger Zone”.

Greta Matassa’s spontaneous and joyful interplay with Barney, Jose and Chris was so pleasing to the audience, and together they created sheer magic during this festive holiday season.

James Moody, an international jazz star since 1949 and a San Diego resident since 1989, has played his last refrain. An acclaimed saxophonist, flutist, composer and band leader for 60 of his 85 years, Mr. Moody died Thursday at 1:07 p.m. at the San Diego Hospice, according to his wife, San Diego Realtor Linda McGowan Moody, who was by his side. His death came after a 10-month battle with pancreatic cancer.

“He couldn’t have gone more peacefully,” said Mrs. Moody, who on Monday had her husband moved from their San Carlos home to the San Diego Hospice.

SEATTLE ART MUSEUM: The PonyBoy Orchestra performing Claude Thornhill’s “Original Birth of the Cool”
from Earshot: In the late 1940’s, big band leader and pianist Claude Thornhill commissioned the young Gil Evans and Gerry Mulligan to write smooth bop-influenced charts for his big band. Slightly ahead of it’s time, this rare music is the precursor to the more famous Miles Davis/Gil Evans recording several years later. Thornhill conceptualized an unusual big band instrumentation that included an army of clarinets, two french horns, and tuba, in addition to the usual complement of saxophones, trumpets, and trombones. The Thornhill band and this body of work by Evans and Mulligan have long been relegated to being a footnote to jazz in the 1950s, and much of the music was thought to be lost. This evening’s concert, presented as part of the Art of Jazz series at the Seattle Art Museum Downtown, is the result of fifteen years of research by David Deacon-Joyner, who pored through the original manuscript scores and, with the editoral help of Fred Stride, Walter Van de Leur, and Jeff Sultanof, has brought this musically and historically significant body of work to light once more. This will be the Northwest premier of music many thought lost for sixty years. David Deacon-Joyner would like to thank Drury College of Springfield, Missouri, where the Thornhill library is housed, and the musicians of Greg Williamson’s Pony Boy Orchestra, who will perform the works. The orchestra is composed of Tracy Knoop, Travis Ranney, Alexey Nikolaev, Mike West, Jay Thomas, Andy Omdahl, Al Keith, Gary Shutes, Greg Schroeder, Tom Varner, Mike Simpson, Bill Park, John Hansen, Nate Parker, and Greg Williamson. Admission to the concert is free with entrance to SAM. The performance begins at 5:30pm on Thursday, December 9. A truly special performance that is not to be missed by fans of the music or students of its history.

from The Chicago Tribune:

The Velvet Lounge, a Near South Side jazz club admired around the world as home base for the late Chicago tenor saxophonist Fred Anderson, has been closed in a dispute among Anderson’s survivors.

The staff of the club walked out last week, in support of Jasmine Sebaggala and Rasminee Harris, Anderson’s granddaughters, who have been managing the jazz shrine since the saxophonist’s death last June, at age 81.

Sebaggala and Harris ceded control of the room, at 67 E.Cermak Rd., to their father, Eugene Anderson, and his brother, Michael Anderson, who are Fred Anderson’s sons. The cross-generational conflict came to a head on Nov. 30, and the club has been dark since Dec. 1.

“My daughters poisoned the staff against me and my brothers, but I truly commend them for doing the jobs they did for the last five months,” said Eugene Anderson, reached by phone in California, where he lives.

“We had a difference of philosophy on the percentages and the corporation,” added Eugene Anderson. “They were doing some very mischievous stuff in the club. All me and my brother did was wait and watch them.

“I hate to put my dirty laundry out there, but they weren’t nice at all.”

Harris and Sebaggala kept the avant-garde bastion running steadily since Anderson’s death, of a heart attack. This was a significant achievement, as experimental-music venues have virtually no profit margin. Many musicians and staff donated their services, or close to it, out of admiration for Anderson.

Continue reading at The Chicago Tribune.

Due to high demand, we have implemented a Special Student Savings for Bela Fleck and the Flecktones this Thursday and Sunday for the 10pm shows. Students save 30% on purchases! Advanced reservations and purchase required by phone with the mention of the STUDENT SPECIAL.