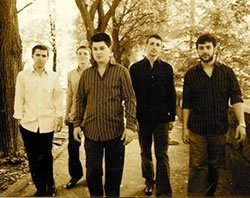 The Here and Now Quintet is quickly establishing themselves as an emerging force in the world of jazz. These five young men all grew up together in Seattle, Washington and have been playing and performing with each other for more than a decade. In the past few years, the members of The Here and Now have moved to the East Coast and have begun to make their marks individually, appearing with some of the most important people in jazz music; a short list of associations include Omer Avital, Alan Pasqua, Wynton Marsalis, Christian McBride, Maria Schneider, Danilo Perez, and Dave Holland. The music of The Here and Now Quintet draws deeply from the rich tradition of jazz and pushes forward into other folkloric world music, inspired heavily by recent trips to Israel and Argentina. The Here and Now Quintet is a unique band in that they are very young, and yet very mature as a group. Their music is an experience not to be missed. The Here and Now has played sold out shows at Seattle’s Triple Door Theater, Tula’s Jazz Club, and premier East Coast Venues including Cornelia Street Cafe in New York’s Greenwich Village and The Lily Pad in Boston. Members of the Quintet have performed globally including the Montreux Jazz Festival, North Sea Jazz Festival, San Sebastian Spain Jazz Festival and appearances in China, Japan, Costa Rica, Germany, France, Argentina, and the UK.