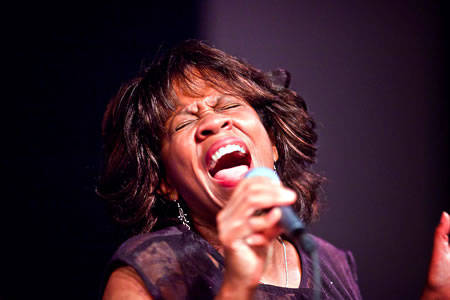 It was so good to see and hear Gail Pettis again this time at Tula’s as part of the Earshot Jazz Festival on one of its last nights for 2010. She is an amazing singer and performer and wonderful to watch on stage.

“As I experience it, the currency of jazz is emotion,” Gail Pettis explained in a 2005 interview with Earshot Jazz. “That’s what you give and hopefully get back. Many of my song selections are a result of how I feel after listening to a particular song for the first time. Several of the tunes I perform [are] chosen after hearing only an instrumental version and discovering the lyrics much later.”

Pettis is a four-time nominee and 2007 winner of the Earshot Golden Ear Award for “Northwest Vocalist of the Year.” Born in Henderson, Kentucky, Pettis grew up in Gary, Indiana. Her grandfather Arthur Pettis was a blues singer and guitarist who recorded for Victor Records in Memphis in 1928 and for Brunswick in Chicago in 1930. In spite of her musical heritage, Pettis’ road to jazz was indirect. She taught and practiced orthodontics full-time for 15 years, before moving to Seattle in 1996 by way of Memphis.