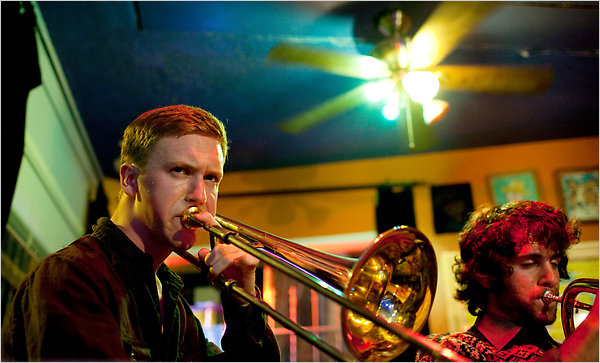 THE atmosphere at Cafe Racer, a coffeehouse and bar in the University District here, skews distinctly postgrunge, with its scuffed floor and mismatched furniture, its thrift-store paintings on boldly colored walls. One Sunday evening this spring the place was packed mainly with teenagers and 20-somethings in T-shirts and sneakers, all listening intently to a band. Everything seemed of a piece except the music: sleek, dynamic large-group jazz, a whirl of dark-hued harmony and billowing rhythm.

“Split Stream” was the name of the composition, by Andy Clausen, an industrious young trombonist. Most of the players in his 10-piece band, crowding one end of the room, were his classmates at Roosevelt High School. A few others hailed from Garfield High School, which like Roosevelt is a reliable favorite in Jazz at Lincoln Center’s prestigious Essentially Ellington High School Jazz Band Competition. The intelligent sheen of Mr. Clausen’s writing was as striking as the composure of his peers, notably the trumpeter Riley Mulherkar, then a Garfield senior. It was impressive, and not just by the yardstick of their age.

Seattle, a city synonymous with alternative rock, has long sustained a provincial jazz culture, without much fuss or a signature sound. To outside jazz partisans the city is known as an incubator for high school talent that usually flies the coop, heading East for conservatory training and professional careers. Mr. Clausen and Mr. Mulherkar are both arriving in New York this week to begin their first semester at the Juilliard Institute for Jazz Studies, which highlights both the lofty promise and a lingering problem of their hometown.