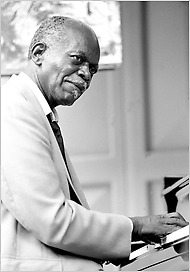 Hank Jones, whose self-effacing nature belied his stature as one of the most respected jazz pianists of the postwar era, died Sunday at a hospice in Manhattan. He was 91.

Mr. Jones spent much of his career in the background. For three and a half decades he was primarily a sideman, most notably with Ella Fitzgerald; for much of that time he also worked as a studio musician on radio and television.

His fellow musicians admired his imagination, his versatility and his distinctive style, which blended the urbanity and rhythmic drive of the Harlem stride pianists, the dexterity of Art Tatum and the harmonic daring of bebop. (The pianist, composer and conductor André Previn once called Mr. Jones his favorite pianist, “regardless of idiom.”)

But unlike his younger brothers Thad, who played trumpet with Count Basie and was later a co-leader of a celebrated big band, and Elvin, an influential drummer who formed a successful combo after six years with John Coltrane’s innovative quartet, Mr. Jones seemed content to keep a low profile.