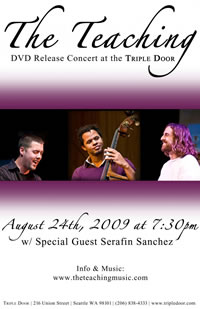 J&J Music & The Teaching are proud to announce the release of The Teaching’s premier DVD. The release concert is set for Monday, August 24th at the beautiful Triple Door music venue across the street from Benaroya Hall.

During the concert scenes from the new DVD will be projected on the big screen behind the band. The DVD features footage captured from The Teaching’s CD release concert at the Triple Door last January, interviews with the band members about their weekly jam session called The Hang, and other special footage from performances, studio hangs and more.

Please mark your calendars and join The Teaching as they play new music they’ve created over the past year. The concert will feature a special guest, saxophonist Serafin Sanchez, who they had the chance to work with last winter in Colorado.