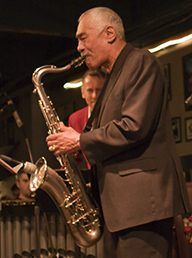 Join us for Seattle’s premier Jazz Awards featuring a performance by the Hadley Caliman Quintet with Jim Wilke, emcee, and a late set by Das Vibenbass.

The veteran tenor saxophonist Hadley Caliman performs with his new quintet at 7pm, with announcer Jim Wilke hosting the awards ceremony at 8pm. At 9:30, Earshot Jazz and the Triple Door present a special send-off concert by Das Vibenbass as they prepare for a collective move to New York City.

from The Seattle Times today …

Polished though the surroundings might be, the sense and scale of the 2008 Golden Ear awards remain much the same. It is a chance to visit with old friends and to measure progress, a night of personal stocktaking and private celebration.

“The quality of the music, the quality of the camaraderie is palpable,” said John Gilbreath, Earshot’s executive director. “It’s important for this to be a community event and for everyone to feel connected to the other people there.
…
Winners will be chosen in eight categories: recording of the year, emerging artist, acoustic jazz ensemble, vocalist of the year, outside jazz group, concert of the year, jazz instrumentalist and the Hall of Fame category, which is open to nonmusicians. This year’s program will also include a special-recognition award.

“Even though it seems like the scene is shrinking, there are more people on it [the ballot] than ever,” said Marriott, winner of five past awards.

Although musicians agree a Golden Ear is very much an honor between peers, they also concede it is difficult to measure the tangible effect of winning.

“It’s like having a music degree,” said drummer and past winner John Bishop. “It’s nice to have, something you can put in your bio and carry with you for whatever it’s worth. As far as tangible things … I noticed when I got into the Hall of Fame last January, I looked at my calendar and for the first time since 1976, I had no gigs that week.”