The quintet’s set began with Caliman’s composition “Kickin’ on the Inside” from the recent Origin CD Gratitude. His intro mentioned that pianist Clement could probably relate to the title, as she is pregnant. “Kickin’…” is a jaunty, mid-tempo tune and served as an excellent warm-up for things to come. At times Caliman’s beautiful tenor timbre was reminiscent of middle-period Coltrane, but he plumbs the depths of the horn’s range more than Trane did. Marriott’s bright-toned trumpet solo was an energetic post-bop romp; he had Hubcaps on his wheels here. Clement’s piano solo was subtle and imaginative. She has a distinctive style and sound all her own. Both as a soloist and as an accompanist she’s a spare, concise player. What she doesn’t play is fully as important as what she does play. Although there aren’t really that many direct connections in terms of sound or touch, she is closer to Red Garland or Mal Waldron (and perhaps Bill Evans) than to the more loquacious pianists who have taken the approaches of McCoy Tyner, Herbie Hancock, Chick Corea and/or Keith Jarrett as their guideposts. She is in the sunlight whereas Waldron was in the shade, but there is a similar sense of elegant yet earthy economy in her playing. Phil Sparks also took a very smooth, rhythmically charged bass solo.

All in all, the sound reinforcement during the set was excellent, though during this first tune a curious ticking sound materialized that – because of the hall’s acoustics – seemed to be coming down at us from the high ceiling. After the set, the soundman confirmed that the mystery noise remained a mystery. It didn’t appear again. 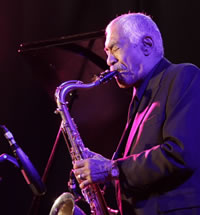 Clare Fischer’s lovely bossa nova “Pensativa” was next. Caliman’s tenor solo again plumbed the depths and rose to the heights of the horn’s range. There’s a sophisticated sense of suspense in the way he structures his improvisations. He often hangs a bit behind the beat or surges just ahead of it; it’s rare that his notes fall smack dab on top of the beat. Marriott’s flügelhorn continued the rhythmically flexible mood; his tone in the higher range of the horn is lovely and he spent quite a bit of time “up” there in this pretty solo. Clement again said more with less in a lean, pithy solo. If she were a novelist rather than a pianist, she’d be Hemingway rather than Faulkner. Caliman continued to twist the bossa rhythm like taffy, with accents falling in sometimes surprising places. His deep, resonant held note at the end was perfect and Lewis’s drumming was particularly tasty as the tune drew to a close.

“What Is This Thing Called Love” was taken way up. Marriott soloed first on flügel. He was fleet, fluent and light on his feet, dancing through the changes. Caliman’s tenor solo got very bluesy at points and his interaction with Lewis was exemplary; it was a witty conversation, sort of a band-within-a-band. Clement took a truly great piano solo that included some very cool locked hands passages. Intuitive yet ratiocinative, emotional yet somehow restrained, her playing has passion and logic. After a series of horn trades the pulse remained the same but was almost more implied than directly stated; Clement’s comping through this segment was delightfully oblique.

Marriott left the stage, and the next number was Caliman’s ballad feature in quartet format. Lewis’s mallet work was graceful and full of color. The tension gradually built as he switched to brushes and some insinuated double-time pushed the energy level up. Caliman has one of the most thoroughly robust tones of any tenor player now active. There’s never a hint of that hard-edged, shiny, stainless steel sound that so many contemporary tenorists utilize. His notes are huge. Each one seems to have a beginning, middle and end: they’re self-contained. Everything breathed during this performance, including the piano solo, which conveyed a crystalline quality; it grew organically into a thing of beauty. The segue to the bass solo was sublime. Sparks presented a honeyed, emotionally direct solo that sang. When the ensemble came back in there was a rubato closing statement with Lewis switching back to mallets. The unaccompanied tenor coda was stately and riveting. The piece’s title was never announced (unless I missed it) and it sounded somehow familiar although I couldn’t place it. At first I thought that it was “Easy Living” with some major alterations. A conversation with bassist Jeff Johnson after the concert solved that riddle. It was “You Leave Me Breathless,” surely one of the great titles in the Classic American Popular Song canon.

The set closed with a vintage Caliman composition, “Commencio,” which is a scorching hard-bop Latin-tinged piece. It has two segments: the first kicking along in an Afro-Cuban sort of groove and the second with a more straight-ahead, pedal-to-the-metal hard swing. Everybody was inspired on this performance, and the piano solo had a particularly ingenious edge, layering Eddie Palmieri-like Afro-Cubanisms over the second segment.