Of the many legendary jazz-fusion supergroups spawned by the ’60s rock explosion — Weather Report, Return to Forever, Headhunters — only one comes to mind that has continuously survived.

That is the quartet Oregon, which has recorded 25 albums and played all over the world, from Carnegie Hall in New York to Sri Lanka, Berlin and Bangladesh.

Absent from the Seattle stage for a decade, Oregon makes a rare and welcome appearance to celebrate last year’s Grammy-nominated album “1000 Kilometers” at Jazz Alley on Tuesday and Wednesday.

Read more from The Seattle Times.

Excerpts from the world premiere of “Heaven and Hell” for tentet composed by Tom Varner will air on Jazz Northwest Sunday April 20 at 1 pm PDT on 88.5, KPLU and www.kplu.org. Recorded at this month’s Art of Jazz Concert at the Seattle Art Museum, the 13-part work was conducted by Mr.Varner who also played French Horn.

According to the composer, the “heaven” is being in the moment with his family here in Seattle, the “hell” is our planet’s last 6 1/2 years, and the piece is a reflection on that juxtaposition. He says it’s also a look back at the “extreme emotional state juxtaposition” of being New Yorkers on 9/11/01 while preparing to go to Hanoi in nine days to adopt their son Jack. He concludes, “In the end, it all worked out … we adopted our daughter Hope in ’04, moved to Seattle in ’05, and here we are, a Seattle family now.”

Musically, “Heaven and Hell” reflects his “love of Messiaen, Stravinsky, Miles Davis, and Charles Mingus. It evolved into a wind octet plus bass and drums – a chamber group that can breathe together, improvise and play jazz and new music.”

The Art of Jazz Concerts are presented by Earshot Jazz, The Seattle Art Museum and KPLU on the second Thursday of each month. Next month’s concert on May 8 will continue the Seattle/New York connection and feature former Seattle singer Kendra Shank’s New York Quartet featuring pianist Frank Kimbrough. The broadcasts are recorded and produced by Jim Wilke for KPLU. The program is also streamed to the internet and available as a podcast after the airdate from kplu.org .

Listen to the audio preview below …

On Saturday, April 19, thousands of independent record stores across the country have teamed up to celebrate Record Store Day … put down your iPod, log off of Amazon.com and head out to a real-life record store and browse through CDs, vinyl, posters and magazines and check out some music.

Silver Platters will be featuring live music in both their Queen Anne and Bellevue stores and included in the mix is some jazz.

Counter the rain today by going out and hearing some great music!

Ballard Jazz Festival in the press 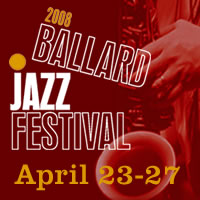 The Ballard Jazz Festival begins next Wednesday and runs through Sunday. Discounts on tickets are available through the festival website.

Previews of the festival have started appearing the local papers.

THE SEATTLE PI: SCAT AROUND IN BALLARD AND SOAK IN JAZZ
Friday’s Jazz Walk is the festival highlight and its biggest draw. “With 16 bands in 13 venues, it is a sure thing,” Jorgensen promises. “If you can’t find something you like in all that, you need to look for a different genre of music.”

THE SEATTLE TIMES
Now in its fifth year, the Ballard Jazz Fest has become one of the most popular and lively jazz events of the year. It gets started next week with the Brotherhood of the Drum on Wednesday and Thursday.

Oops. Well it was fun while it lasted.

The most important American jazz gathering of the year, scheduled to take place in Seattle in January, has been canceled because its presenter is declaring bankruptcy.

In what is being described as a “perfect storm” of bad luck, unchecked growth, fundraising and management failures, the International Association for Jazz Education (IAJE) — an important link to Seattle’s successful school jazz-band scene — has collapsed.

According to IAJE’s legal counsel, Alan Bergman, it will go into Chapter 7 bankruptcy and be turned over to a trustee, its assets parceled out to creditors.

A letter from the group’s president, Chuck Owen, is scheduled to go out to members as early as today, announcing the bankruptcy — and essentially the dissolution — of the 40-year-old organization.

A disc jockey, Seattle Times columnist and singer/bandleader who presented Fats Waller, Lionel Hampton, Charlie Parker, among others, Mr. Bobrow had a career in popular music and jazz that spanned seven decades.

Mr. Bobrow, 90, died of cancer, according to his brother, Mort.

In 1950, Mr. Bobrow started promoting bebop pianist Cecil Young, often at the 908 Club, on 12th Avenue. The quartet later went on to national tours and a popular recording. In 1952, Mr. Bobrow presented a historic concert at the Metropolitan Theatre that featured Parker, Dave Brubeck and Chet Baker.

Mr. Bobrow loved to tell the story about how Parker first had to be dragged from the bar at the Grosvenor Hotel to the show, and then wound up spending the night in Bobrow’s apartment, leaving a “goodbye” scrawled in lipstick the next morning, before Bobrow got up.

Mr. Bobrow also presented legendary saxophonist Stan Getz, after which Getz, in an infamous incident, was arrested for robbing a drugstore.

Tonight at The Sunset

Just found out about this … everyone should check it out:

Join us in the encounter of two musicians from two different countries in South America, Brazil and Peru. With their music they will take us to the magical world of the Latin American cultures. Guitarist Alfredo Muro and pianist/flautist Jovino Santos Neto will be the featured performers.

JOVINO SANTOS NETO
Brazilian-born Jovino Santos Neto worked as a pianist, flutist and producer with the legendary Hermeto Pascoal from 1977 to 1992. He is a Professor of Music at Seattle’s Cornish College of the Arts. He has released several recordings as the leader of his own ensemble and also in collaboration with other musicians. He has received several jazz and chamber music commissions.

His 2 most recent CDs, “Canto do Rio” (2004) and “Roda Carioca” (2006) were both nominated for a Latin Grammy. His latest release is “Alma do Nordeste”, inspired by the music of Northeastern Brazil.

ALFREDO MURO
Born in Lima-Peru, Alfredo is a virtuoso guitarist, arranger and composer.
His style proved there are no frontiers between classical and popular music, gliding in a very elegant way. He had the honor to represent his native country of Peru in several International Guitar Festivals, and also performed in Special Audience at The Vatican for Pope John Paul II.

Recently, he was featured at The Kennedy Center in DC.

The workshops are open to musicians of all ages and levels. For more information, contact Ev Stern at 206-782-2331.

Tonight there are two events in Belltown that we highly recommend members of the Seattle jazz community attend.

Beginning at 5:00pm at Tula’s Jazz Club, the Earshot Jazz Board of Directors is holding a public forum. Everyone is invited and encouraged to bring their questions, ideas, and suggestions for the organization. There will be a sign-up sheet for public comment.

I’m very sorry to pass on the news from Paul West that Norm Bobrow passed last night. Paul said he owed whatever success he had in the music business to Norm, who first started promoting jazz concerts when he was a student at The UW in the late 30s. He was also a conga player, a fellow broadcaster, and a sweet man who had many friends and dearly loved jazz and everyone associated with it.

When I introduced him at his induction into the Seattle Jazz Hall of Fame in 1996, I told him “When I grow up, Norm, I want to be just like you!” He got a big kick out of that and recalled it again when I saw him at The New Orleans just a couple of months ago when we were both there listening to Jay Thomas’ Big Band.

I’m sure there will be many remembrances of Norm Bobrow in the next few days and information about a memorial. He was a major contributor to the Seattle Jazz Scene. There are numerous references to him in Paul DeBarros’ “Jackson Street After Hours”.

Well … the first signs of Spring came and went. Here is a list of what’s happening tonight … Folk Music, the latest CD by The Deep Blue Organ Trio on Origin Records, won the award for “Best Jazz CD” at the 2008 Chicago Music Awards presentation last month. The CD held its #2 position on the Jazz Week chart for four straight weeks and remained in the top five for two months. Jazz fans across the nation are listening as the group continues to find ways to connect the continuum of the black music experience, blending jazz with soul, R&B, blues, gospel, and more. Celebrating the classic jazz combo configuration of the Hammond B3 organ, guitar and drums, as well as the Black-American experience through music, Chris Foreman, Greg Rockingham and Bobby Broom bring a modern edge to a musical timepiece.