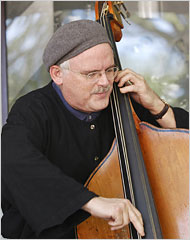 From the New York Times:

Dennis Irwin, who for more than 30 years was a much-in-demand New York jazz bassist and whose recent illness became a rallying point for jazz musicians without medical insurance, died on Monday in Manhattan. He was 56.

The cause was liver failure as a result of cancer, said his son, Michael Irwin.

He died the same day as a benefit concert was presented in his honor, staged by Jazz at Lincoln Center and including performances by Wynton Marsalis, Tony Bennett, Jon Hendricks, Mose Allison, Joe Lovano, Bill Frisell, John Scofield, and many others. Part of the concert’s proceeds will go toward Mr. Irwin’s medical expenses. The rest, in line with his stated wishes, will go to other musicians in need, through the Jazz Foundation of America, which has helped many uninsured musicians — including Mr. Irwin — pay for healthcare.

The Seattle Jazz Scene.com has covered saxophonist and former Seattle resident Andrew D’Angelo and his battle with brain cancer. The New York Times had a story just last week centered around both D’Angelo and Irwin and the larger issue of the lack of affordable medical insurance within the music community.

Again, from The New York Times:

The health of jazz, as a topic of conversation, has long inspired a lot of hand wringing among sympathetic parties. When the focus turns toward the health of jazz musicians, the discussion assumes a different, less abstract character: solicitous and supportive. Most people who play jazz for a living are accustomed to self-reliance. When that system fails, they lean on one another. {read the full story}

For local Seattle musicians, please make sure and check out our post earlier this week about the free heath screenings offered by MusicCares. Click here for more info.

The free download today at All About Jazz is Back For More from Hadley Caliman’s new CD, Gratitude.

Returning with his first recording as a leader in over two decades, the legendary tenor saxophonist teams up with vibist Joe Locke, drummer Joe LaBarbera, trumpeter Thomas Marriott and bassist Phil Sparks, re-establishing himself as one of the preeminent post-bop saxophonists alive. Caliman studied with Dexter Gordon, played with Gerald Wilson’s Big Band, the Bobby Bryant Band, & Mongo Santamaria in the ’50s, and later toured and recorded with Freddie Hubbard, Joe Henderson, Bobby Hutcherson and Santana throughout the US and Europe through the ’70s.

Click here to buy the CD from Origin Records.

Daniel Barry and SWOJO at The Seattle Drum School

OA2 Records presents a double-bill of music on Tuesday, March 11 at The Seattle Drum School featuring music from Daniel Barry‘s new CD, “Walk All Ways,” and The Seattle Women’s Jazz Orchestra and their recent CD, “Meeting Of The Waters.”

Sculpting a new acoustic sound that defies categorization while voicing universal sonorities, Daniel Barry creates a fluid blend of chamber music and improvised shapes for the 21st century. “Walk All Ways” interweaves Western Classical music traditions with the sensuous rhythmic vitality of the Caribbean and South America, adding the spirit of free-blowing jazz to create a distinct, original all-encompassing world vision expressed through the pure language of sound.

SWOJO shows off their musical muscle in this set of original tracks recorded live in concert. Performing the music of Hazel Leach, Jill Townsend and their musical director, Dr. Daniel Barry, “Meeting of the Waters” exhibits the power, energy and spirit of the 7-year old group’s live performances. SWOJO’s distinctive sound blends the dynamic and the artful, the bold and the sensitive, exploring the jazz mainstream and all manner of Latin music.

It is Monday … and here is who’s playing music tonight:

MusiCares, in partnership with Qliance, a Seattle based monthly-fee primary care clinic, presents a limited opportunity to receive a free basic health assessment. This basic health assessment includes glucose, blood pressure, BMI and cholesterol tests. Hepatitis C+ and HIV screenings will also be provided. Following the testing, a primary care specialist will meet confidentially with each participant to discuss basic health concerns, family/individual medical history and test results. Participants will receive a packet regarding Qliance information, their Health Assessment Overview Documents and supplementary materials given by the provider in relation to their health discussions. They will also receive a coupon for $30 off the registration fee should they decide to join Qliance.

IMPORTANT: For accurate results you must be fasting for 8-12 hours prior to your scheduled appointment. This means no food. Water is encouraged; tea and black coffee are also ok as long as there is nothing in them. Testing can be conducted otherwise, but will not be as accurate or a reliable source of information.

Assessments will be provided free of charge to pre-screened, pre-approved music professionals, upon establishing eligibility. Appointments will be assigned in 30 minute increments, from 8 a.m. to 2 p.m..

Set your clock ahead or else you’ll be an hour late for Sunday’s music.

From Paul de Barros’ Friday Column in The Seattle Times:

Jazz has historically flourished in cities that sanctioned and profited from vice and crime.

In Kansas City, during the 1920s and ’30s, jazz flowered under the powerful boss, Mayor Tom Pendergast, nurturing such giants as Count Basie, Joe Turner and Lester Young, to name just a few. (Later, Seattle’s Jackson Street era was a similar, if less important scene.)

During this period, 30 cabarets and ballrooms flourished within walking distance of the corner of 12th and The Paseo, a grand boulevard one block from Vine, made more famous by the lyrics of the 1959 blues/rock song “Kansas City.”

A couple of shows this weekend at Bake’s Place that singer fans won’t want to miss.

This Week on Jazz NW

NEA Jazz Master Hank Jones and Roberta Gambarini, the singer he calls “the best I’ve heard since Ella Fitzgerald”, are featured on Jazz Northwest on Sunday March 9 at 1 pm Pacific Time on 88.5, KPLU. Their recent performance at Dimitrou’s Jazz Alley was recorded especially for Jazz Northwest. Joining Hank Jones and Roberta Gambarini in this performance are Neil Swainson on bass, and Willie Jones III on drums.

Hank Jones will celebrate his 90th birthday this year and has had many honors come his way including the highest honor in Jazz, the NEA Jazz Masters Award bestowed on Mr.Jones in 1989. The American Society of Composers, Authors and Publishers (ASCAP) honored him with the Jazz Living Legend Award in 2003. In a career spanning six decades he has recorded over 60 albums as a leader and participated in hundreds of others with dozens of jazz legends including Charlie Parker, Lester Young, Miles Davis and Ella Fitzgerald, to name a few.

Roberta Gambarini was born in a music-loving family in Torino, Italy and began her professional singing career in Europe. She moved to the US in 1998 where her extraordinary talent was first noted by musicians she performed with including the Dizzy Gillespie All-Star Big Band. The DownBeat Critics’ Poll in 2007 named her No.1 talent deserving wider recognition. She has developed a world-wide following and has appeared at most of the world’s great jazz festivals and concert halls.

Roberta Gambarini and Hank Jones first performed together at The Lionel Hampton Jazz Festival a few years ago and immediately established a mutual admiration society. Their duo CD “You Are There” has recently been issued and they have been recording for a second CD with trio.

Dimitirou’s Jazz Alley is one of the world’s great jazz clubs. It provided a perfect setting for our recording, with a Steinway concert grand, great house sound and an attentive, appreciative capacity audience. This program will also be available as a podcast from kplu.org after the airdate.

Listen to the Audio Preview below.

The Bellevue Downtown Association has announced a major new jazz festival for this spring, culminating at the Meydenbauer Center Memorial Day Weekend with saxophonist Branford Marsalis performing May 23 and the Spanish Harlem Orchestra on May 24.

The new festival is being booked by Bill Royston, the force behind the highly successful Portland Jazz Festival.

Tickets are not yet available but information can be found at www.bellevuejazz.com.

Drummer and composer Brad Gibson will present an afternoon of original works for his Senior Recital inspired by Bebop, Classical, and R & B. The concert will take place on Sunday, March 2nd at 2:00pm.