One of the partners behind Origin Records, not to mention the Ballard Jazz Festival, seattlejazzscene.com, Sunday jazz at the Hendrix Lounge (in Columbia City) … this guy never seems to run out of projects.

This week, however, is not about Jorgensen the playa, but the player. Thursday, the 35-year-old dynamo celebrates the release of “Another Morning” (Origin), the new album by his group, Matt Jorgensen + 451. But he’s also on the other two best jazz tickets in town.

“It’s rare that I get to do three really cool gigs in a week,” said Jorgensen in a phone interview from his car. “After that, 451’s going out on the road for a week, then I’m getting ready for the Ballard Festival. I’ll figure out the rest from there.”

Click here to continue reading at The Seattle Times.

This Weekend on Jazz Northwest 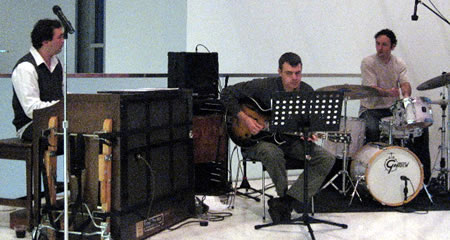 The Joe Doria Trio is a classic-style jazz organ trio … with a Hammond B3, guitar and drums, and a hard- swinging approach to everything they play. The trio played this month’s Art of Jazz concert at the Seattle Art Museum and if you missed it or want to hear it again, listen Sunday afternoon at 1 for The Joe Doria Trio in concert on Jazz Northwest from 88-5, KPLU.

The Art of Jazz concerts are presented on the second Thursday of each month by Earshot Jazz, KPLU, and the Seattle Art Museum and are free and open to the public. The next concert will feature the Tom Varner Dektet on April 10 from 5:30 to 7:30 pm.

listen to an audio preview below

Goat at Gallery 1412 this Friday

This Friday is shaping up to be a great night of music.

Another event to add to your schedule is Greg Sinibaldi’s new group, Goat. They just finished recording a new CD and will be performing some of their new music. Saxophonist Hadley Caliman will celebrate the release of his new CD, Gratitude, on Friday, March 21, at Tula’s Jazz Club. The show will feature Joe Locke on vibes, Thomas Marriott on trumpet, Phil Sparks on bass and Matt Jorgensen on drums.

Looking Ahead: Jazz and Sushi

Plan on checking out Jazz and Sushi on an up-coming Friday night. You can always check out the schedule at the Pony Boy Records website but here is the schedule for April.

The Seattle Composers’ Salon is a bi-monthly, informal presentation of new music by Seattle composers. The salon features finished works, previews and works-in-progress, and brings together composers, performers and audience members in a casual setting that allows for discussion and experimentation.

The next Seattle Composers Salon will be held on Friday, March 28 at 8:00pm

Seattle Times: A powerful “Hunger”: The Donner Party as opera

From Paul de Barros’ Friday column in The Seattle Times:

For anyone who grew up in California — as I did — the story of the Donner Party is indelibly embedded in one’s psyche, an archetype of terrible possibility.

Though Seattle composer and free-jazz guitarist Tom Baker was raised in rural Idaho, his father was from the San Francisco Bay Area. Almost every summer, their family crested Donner Pass in the Sierra Nevada range, where a monument stands to that fateful 1846 journey, marked by starvation, death and cannibalism.

“We would always stop and read the thing,” Baker said in an interview last week. “It really was frightening for me. I remember times after this, when we would be traveling and it would be snowing and I would get very nervous about not getting to where we were going.”

Continue reading at The Seattle Times.com

We’ve reached another weekend. Go out and celebrate by catching a show!

By Dan McClenaghan, All About Jazz.com

The group is a rhythm section and saxophone, but it sounds like no other. No one playing in this format—with the exception of perhaps Vijay Iyer—has crafted a more distinctive jazz identity.

Another Morning is a big step forward from the excellent Hope (Origin Records, 2004). There’s a more on-the-edge feeling to the music, the approach a bit more unfettered. The musicians have grown and the sound has evolved in the direction of urgency and adventure.

Opening with “New Beginnings,” Burns’ reverent organ goes to church. Then flip the light switch, and Matt Jorgensen + 451 blows in, very much in a democratic mode, joined by guest trumpeter Thomas Marriott.

The jazz/rock aesthetic comes in large part from Burns, for whom there are no limits to the noises made on his keyboards. Aiding the effort is guest guitarist Jason Goessl on the Matt Jorgensen/Jeff McSpadden-penned “Sweet Pea.” The keyboard and guitar sound like competing blacksmiths trading metallic hammer blows in front of Jorgensen’s industrial percussion groove.

The sixties atmosphere is bolstered by two covers of rock songs: The Beatles’ “Helter Skelter”—one of the more raucous tunes from their white album, The Beatles (Apple Records, 1968)—and Neil Young’s protest over the 1970 Kent State killings, “Ohio,” that again features Goessl, sounding crunchy and quite Neil Young-ish.

It’s been a four-year span between 2004’s Hope and 2008’s Another Morning, but Matt Jorgensen + 451 have made it worth the wait. Another fine and distinctive outing, with the adventure factor up a couple of notches.

Read this review at All About Jazz.com
Buy this CD from Origin Records

Earshot Jazz collaborates with the Seattle Art Museum in programming and presenting the Art of Jazz Series, now in it’s 13th year. Always well attended, the after-work concerts are free with museum admission — a great bargain given the two-for-one line up of fine jazz and major art exhibits. Join us the Seattle Art Museum on the second Thursday of every month.

Coming up on Jazz Northwest this Sunday afternoon…. new CDs by Hadley Caliman, Trish Hatley, Matt Jorgensen, unissued concert recordings by Jim Knapp and the Seattle Repertory Jazz Orchestra and more, plus we’ll bring you up to date on best locations for live jazz.

Jazz Northwest airs on 88-5, KPLU Sunday afternoons at 1. The program is also streamed at kplu.org and available as a podcast after the air date.

Saxophonist Mark Taylor will be performing this Saturday at Tula’s with a quartet featuring Dawn Clement on piano, Chris Symer on bass and Byron Vannoy on drums.

Don’t miss this opportunity to see Mark lead his own quartet.