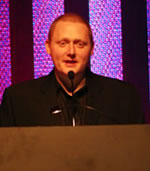 Brazilian pianist Jovino Santos Neto and his group opening the night with a set of music featuring Chuck Deardorf on bass, Mark Ivester on drums and Jeff Bush on percussion.

The award for Emerging Artist went to bassist Jon Hamar who thanked all of his fellow nominees who he has had the pleasure of performing with.

New York vibraphonist Joe Locke‘s performance at Jazz Port Townsend won the 2007 Northwest Concert of the Year award. This was the second Golden Ear Award for Joe Locke who won in 2005 for his performance at the Ballard Jazz Festival. 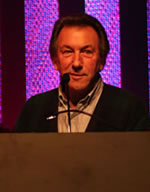 Two drummers inducted into the Seattle Jazz Hall of Fame.

Dean Hodges, who began his career after graduating from Oscar Peterson’s Advanced School of Contemporary Music, is the elder statesman of Seattle drumming and has performed with nearly every artist imaginable.

Origin Records founder and drummer John Bishop was also inducted into the Hall of Fame for his years of performing and promoting the Seattle jazz scene.