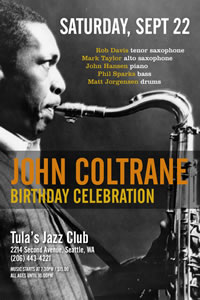 The show will be a reunion of sorts. Davis and Taylor have a long history together going back to their days at the University of Washington. Davis was active on the Seattle jazz scene before moving to Portland a decade ago.

The night will be comprised of classic Coltrane compositions from throughout his recording career. Make your reservations now to make sure you have a seat for this great night of music. 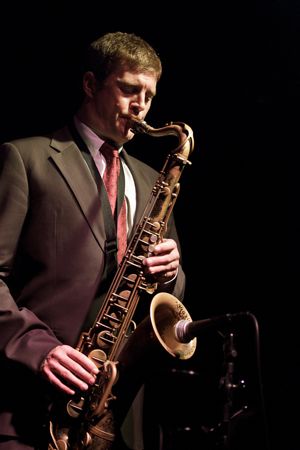 The NYC saxophonist, who is originally from Olympia, will be in town for a family reunion and has organized a quartet featuring George Colligan (piano), Chuck Deardorf (bass) and Matt Jorgensen (drums). 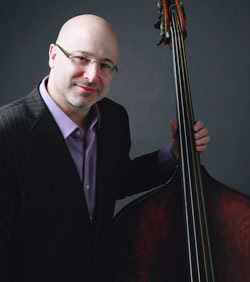 update: due to a scheduling conflict this show has been cancelled.

Seattle Jazz Scene is proud to welcome bassist Ben Wolfe and his trio to Seattle for a one-night only performance at the CMA Gallery. 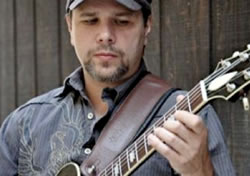 Tickets available at the door.

George Colligan is a pianist, organist,drummer, trumpeter, teacher, and bandleader – now based in Portland, OR – who is one of the most original and compelling jazz artists of his generation. An award-winning composer (Chamber Music America/Doris Duke Foundation grant recipient) and player (winner, Jazzconnect.com Jazz Competition), Colligan is highly in demand as a sideman, having worked with players like Cassandra Wilson, Don Byron, Buster Williams, and Lonnie Plaxico, both on the bandstand and in recording sessions (appearing on over 100 CDs). He has released 21 recordings full of his intelligent writing and impressive technique. His latest CD on the Piloo Records Label and entitled Pride and Joy. Colligan’s musical style incorporates everything from showtunes to funk, from free improvisation to 20th century classical music. His performances include dazzling technique as well as mature restraint. Colligan was on the faculty of the Juilliard School for two years and is currently an Assistant Professor at Portland State University. He is currently a member of Jack DeJohnette’s New Quintet.Recently, Colligan started playing the Hammond 44 Melodion(melodica). He also started a popular blog called jazztruth(jazztruth.blogspot.com).