The Jazz Now! Seattle Podcast is approaching its 100th episode. In celebration of that milestone, radio hosts Dave Marriott and Jason Parker have put together some of their favorite tracks over the 100 episodes.

It is with great enthusiasm that I send a virtual high five and a holler out to Seattle jazz musicians Jason Parker and Dave Marriott for their spanking new podcast Jazz Now! Seattle. Jazz Now! Seattle is a weekly podcast that features music from local artists in the Seattle community. The mission of the podcast is twofold: (1) To put the spotlight on Seattle musicians and their projects and to help publicize their performances. (2) To present the thriving Seattle jazz scene to the rest of the world. Now in its fifth week, Jazz Now! Seattle has already been downloaded 1000 times

Jason and Dave are working jazz musicians and both have backgrounds in broadcasting. Jason is a trumpeter, blogger, bandleader and one half of the production and booking company J & J Music. Jason worked in radio for several years and is the former musical director for KMTT radio in Seattle. He is an occasional guest host on KPLU. Dave is an award-winning trombonist and plays with a variety of groups including the Seattle Repertory Jazz Orchestra, the Emerald City Jazz Orchestra and his own band Septology. Dave was also the force behind the “original” Seattle jazz podcast “Seattle JazzScene.” Jason and Dave combine their experience and knowledge with sheer enthusiasm to create podcasts that offer a unique view of Seattle jazz. They highlight music from “every corner of the jazz spectrum in Seattle.”  So far, the podcasts have included a wide-range of music from artists such as Richard Cole, Wayne Horvitz, Matt Jorgenson, McTuff, Zubatto Syndicate, Gail Pettis, Nelda Swiggett and many, many more. The podcasts are presently focused on artists that are appearing in the Earshot Jazz Festival, which runs until November 7th. In Dave’s words, “We’re both fans of the scene that we’re a part of.”

Jason and Dave record new episodes every Monday and spend the rest of the week editing and also going through music for future podcasts. For two musicians who already have their hands in numerous other ventures, their efforts on behalf of the local scene are amazing. While it would be easier to stay focused solely on their own pursuits, Jason and Dave choose to cheer on other artists and help them get attention for their music. Jason and Dave are true ambassadors for Seattle jazz, and our community is all the better for it. If you haven’t already, I highly recommend checking out Jazz Now! Seattle. While you’re at it, maybe send a message of thanks to Jason and Dave for their time, work and generosity. They deserve it.

“We’ve figured out a way to make something that’s going to be a good contribution.”
– Dave Marriott 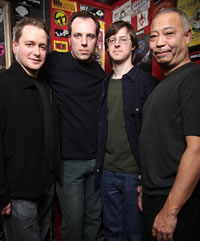 Download the first set of Matt Jorgensen +451 performing at the Portland Jazz Festival on Friday, February 15.

Their new CD, Another Morning, will come out in March and they will be performing at The Triple Door on Thursday, March 27. Call 206-838-4333 to make reservations.

Click the link below to play the mp3 file. You can listen here or goto the Origin Records Podcast page to download the episode. While you are there, go ahead and subscribe to the podcast so you get all the latest episodes.

Use the player below to stream or download the episode