from All About Jazz | Buy Dialogue at Human Spirit’s website

The three players who now call themselves Human Spirit—drummer Matt Jorgensen, trumpeter Thomas Marriott and alto saxophonist Mark Taylor—have a very successful track record of recording together. They teamed up on Jorgensen’s magnificent Tattooed by Passion (2010) and Another Morning (2008), and on Marriott’s strange and splendid Crazy: The Music of Willie Nelson (2008) and Flexicon (2009), all on Seattle’s Origin Records. But the idea of the group’s name came certainly from Marriott’s Human Spirit (Origin Records), teaming the trio with organist Gary Versace for one of 2011’s most dynamic and modern-sounding recordings.

Dialogue finds the group—with special guests sitting in on piano and bass—in a live setting at the Earshot Jazz Festival, and sounding very spirited indeed. Jorgensen, Marriott and Taylor have a special genius for for taking the standard jazz quintet—sax, trumpet and rhythm section—and breathing new life into the format. The distinct ensemble sound comes, in part, from the melding of Taylor’s tart tone, with its “lemonade a couple of teaspoons short on the sugar” tang blending with Marriott’s clean, pure timbre. A vibrant simpatico rises up, whether the horn men are playing unison lines or interweaving long notes, leading to always-inspired soloing. Jorgensen, in the drum chair, channels tumultuous grooves and—as the best of the best drummers seem to do (like the late Paul Motian, and Al Foster)—makes everyone sound better, as he subtly boosts the music and catches the ear with the unexpected.

Dialogue‘s tunes are all originals: two by Jorgensen; two from Taylor; and four from perhaps nominal leader Marriott. It’s a live show, and the energy level is high, with mostly up-tempo workouts and lots of fire. And the special guests are inspired choices, as they’ve always been with Human Spirit—whether, as on previous recordings, it was guitarist Corey Christiansen and keyboardist Ryan Burns, or bassists Geoff Harper, Dave Captein or Jeff Johnson. The guest slots on Dialogue go to pianist Orrin Evans, who plays with percussive gusto, and bassist Essiet Essiet, who supplies a solid foundation for the horns’ soaring free flights.

Human Spirit offers up high wire jazz quintet sound with Dialogue, an outing that takes a standard lineup and shifts it into a different dimension. 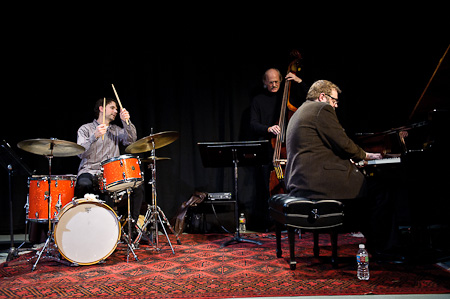 Pianist Dave Peck will perform this weekend at Tula’s Jazz Club, May 18-19. Joining Peck will be bassist Jeff Johnson and drummer Eric Eagle.

Janiva Magness: ‘Stronger For It’ at Jazz Alley

Tough but tender blues singer Janiva Magness has come into her own with her first album featuring original, confessional songs, “Stronger For It” (Alligator). The titles — “Whistlin’ in the Dark,” “I Won’t Cry” and Ike Turner’s “You Got What You Wanted” — tell the story of pain, loss and redemption. Magness, who won the 2009 Blues Music Award for B.B. King Entertainer of the Year, only the second woman (besides Koko Taylor) so honored, celebrates the release of her new album in Seattle. Magness performs at 7:30 p.m. Tuesday and Wednesday at Jazz Alley, 2033 Sixth Ave., Seattle; $22.50 (206-441-9729 or www.jazzalley.com).

The last time someone tried to open a jazz club in Bellevue, it lasted all of seven weeks.

But that was almost 30 years ago. Craig Baker thinks it’s time to give jazz another shot.

On Friday, he is moving his popular weekend supper club, Bake’s Place, from Issaquah to a new million-dollar establishment in downtown Bellevue, where it will be open seven nights a week. The new boîte joins the revived Bellevue Jazz Festival and the monthly 10-year-old Eastside Jazz series in a troika that may finally give jazz a permanent foothold on the Eastside.

Some see Bake’s — and jazz itself — as a harbinger of urban sophistication, a natural evolution for Bellevue’s newly dense downtown core. Along with the Bellevue Arts Museum and the Tateuchi Center (in the planning stages), it can be read as part of the burgeoning aspirations of a place that has tired of crossing the lake for its cup of culture.

“It’s a city that’s hungry for more than restaurants,” Baker says of Bellevue.

It’s also a city that has grown exponentially. Thanks to intense condominium development, there are 10,000 people living in Bellevue’s downtown core now and Baker’s new club sits right on the edge of it, in the Columbia West Building at the corner of 108th Avenue Northeast and Northeast Second Street. Baker speculates that 30 to 40 percent of the patrons for his new club will come from the neighborhood.

Both he and Leslie Lloyd, president of the Bellevue Downtown Association (which presents the Bellevue Jazz Festival), think the new bridge toll on Highway 520 might help keep people on the Eastside at night, too.

Seattle musicians on the move 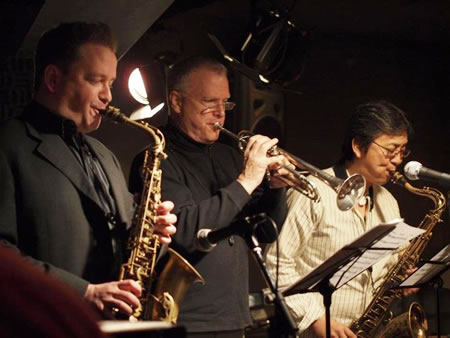 Northwest jazz musicians have been making their mark on jazz scenes beyond our own.

Here are some quick updates on recent and up-coming travels by Seattle jazz musicians:

Jay Thomas made another semi-annual trip to Japan in March for a week of performances with the CUG Jazz Orchestra. Joining him on this trip was saxophonist Mark Taylor.

Bassist Phil Sparks will head to Japan at the end of this month for three performances with Mose Allison.

Human Spirit, featuring Thomas Marriott, Mark Taylor and Matt Jorgensen, are performing at The Cellar Jazz Club this weekend in Vancouver, BC. They are promoting their new CD, Dialogue, which comes out next Tuesday.

Trumpeter Chad McCullough introduced his new group, The Spin Quartet, on a recent mini-tour of the Northwest.  He also headed down to Eugene, OR, for a concert of original music at The Broadway House. Next month he heads across Canada with the group Tunnel Six and later this year heads back to Europe for performances with pianist Bram Weijters. McCullough and Weijters will also be performing at Boxley’s on May 24, a house concert on May 25, The Castle Key in Port Townsend on May 26 and Locol in West Seattle on May 27.

The Teaching (Josh Rawlings – piano; Evan Flory-Barnes – bass; Jeremy Jones – drums) recently returned from a mini-tour of Denver and other stops in Colorado.

Vocalist Katy Bourne is headed to Oklahoma, with pianist Randy Halberstadt, for a performance this weekend. 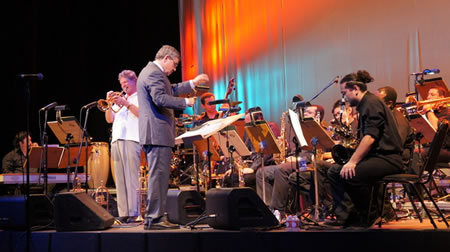 Trumpeter and composer Daniel Barry received a Fulbright Award to serve as a Composer-in-Residence at the Federal University in Campinas (Unicamp). He’s currently been there for 10 weeks and will return to Seattle at the end of May. Barry writes, “I’m rehearsing and conducting several orchestras in the state of Sao Paulo. We are performing the music of Ellington, Mingus and my own compositions.”

Bad Luck, which is Neil Welch on saxophone and Chris Icasiano on drums, is currently on a tour that will take them Santa Barbara, Lost Angeles, San Francisco, Sacramento, Berkley, Eugene, Portland and Seattle.

Note: I’m sure there are plenty of artists we are missing.  If you can add to this list, send a quick note to [email protected] and we’ll update in a few days. 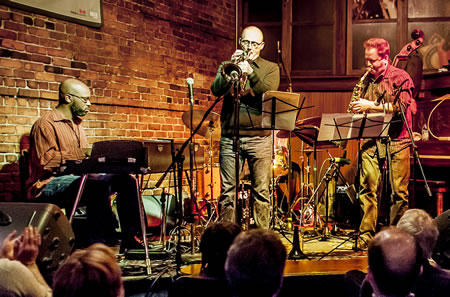 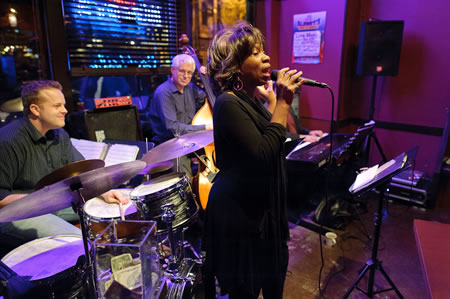 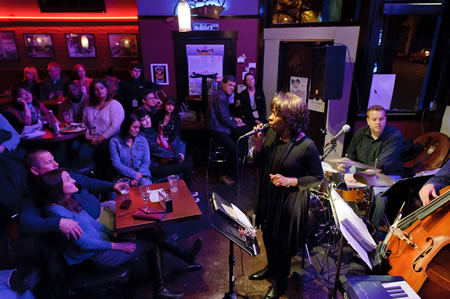 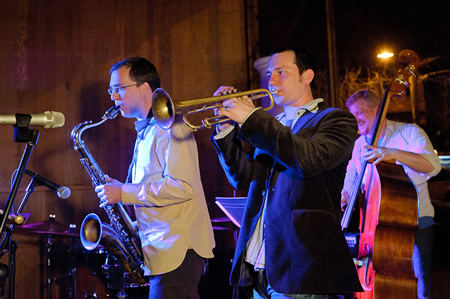 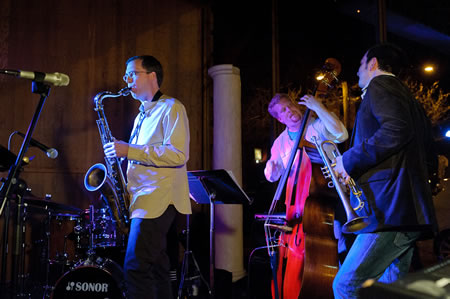 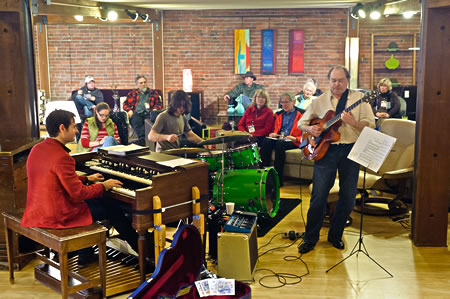 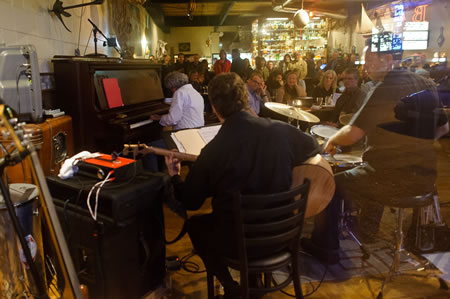 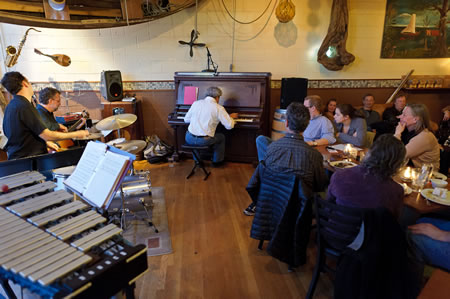 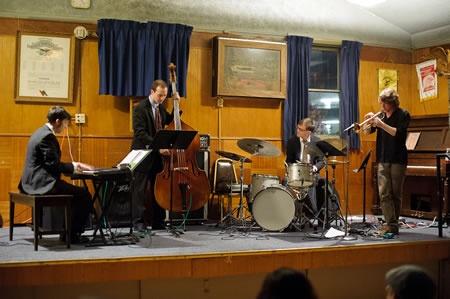 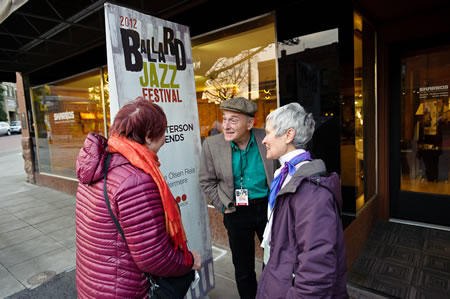 Jazz fans having fun at the Ballard Jazz Walk! – photo by Jim Levitt

The Seattle school, with a world-renowned jazz program, has won three times previously, but on Sunday was bested by a Florida magnet school, Dillard Center for the Arts, from Fort Lauderdale, which took first place, as it did last year. Miami’s New World School of the Arts, which won in 2005, placed third.

The announcement Sunday night came at the end of a concert by the three finalists and the Jazz at Lincoln Center Orchestra at Avery Fisher Hall.

“The kids were a little disappointed because of how coherently they played,” said Roosevelt jazz-band director Scott Brown after the announcement. “Which is not taking anything away from Dillard. They played great.”

Brown said the Roosevelt kids “blew the roof off Avery Fisher Hall at the Sunday night concert.” Afterward, Brown said Duke Ellington’s granddaughter said to Brown, “Duke would have been proud to have had his music represented that way.”

Two other Seattle-area jazz bands competed over the weekend — Mountlake Terrace and Ballard.

Darin Faul’s Mountlake Terrace bunch are old hands, having been finalists six times, placing third in 2005 and 2011. But for Ballard this was all new, and the school’s band director, Michael James, was extremely pleased.

“It’s been a very cool experience,” said James. “I’m very proud of how my kids did. They were so thrilled.”

Bobby Broom Trio at The Ballard Jazz Festival next on Jazz Northwest, May 6 on 88.5 KPLU 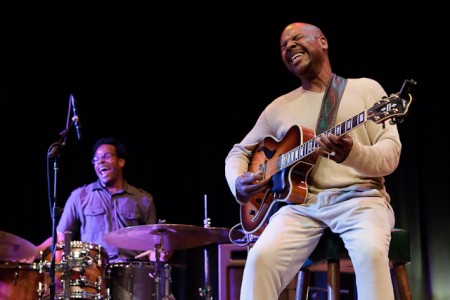 What better way to celebrate April’s Jazz Month than the Tenth Annual Ballard Jazz Festival? There were four nights featuring drums and guitars, a jazz walk among a dozen venues featuring some of Seattle’s top jazz talent, and culminated in a concert which co-billed pianist Orrin Evans’ Quartet and The Bobby Broom Trio. The latter is featured in the first broadcast from this year’s festival on Jazz Northwest, Sunday May 6 at 1 pm PDT on 88.5 KPLU and kplu.org.

Bobby Broom grew up in Harlem, began guitar at 12 and played his first gig with Sonny Rollins at 17 at Carnegie Hall! Now based in Chicago, he’s toured and recorded with Sonny Rollins several times since then, and leads his own trio as well as being integral to the Deep Blue Organ Trio. Both groups have long-standing weekly gigs in Chicago as well as touring and recording for Seattle-based Origin Records.

For this concert, the Bobby Broom Trio played music featured in his 2009 release “Bobby Broom Plays for Monk” and his forthcoming Origin release, “Upper West Side Story.” The Bobby Broom Trio includes Dennis Carroll, bass and Kobie Watkins on drums, whose sensitivity and energy match the leader’s joyful spirit and intensity.

Jazz Northwest is recorded and produced by Jim Wilke, exclusively for 88.5, KPLU. It airs each Sunday afternoon at 1 pm Pacific and is streamed at kplu.org. The program is also available as a podcast after the air date.