Well … who knows how much snow is coming our way. Make sure you call ahead to confirm that music is happening.

We got an email earlier today saying that Monday night’s show at Tula’s had been cancelled. Make sure you call ahead if you are heading out to hear music.

And this from the Eastside Jazz Club:

Due to this Crazy Weather we have no option but to reschedule our Tuesday 17th Concert to Friday 20th at 7.30pm

Thanks to the wonderful General Manager and Staff at the Marriott Courtyard Hotel, also to Sherman Clay Seattle for the Piano, Greg at Advanced Piano Movers and Jeff our resident Piano Tuner for adjusting their schedules to accommodate this change. Details as before. Only the date has changed.

That fabulous pianist from Pueblo Colorado SAM PANNUNZIO AND HIS TRIO. Our newly formed division Eastside Jazz Recordings will be hosting and will have copies of Sam’s debut CD “Goin Home” for sale. Come “home,” join the party and enjoy Sam performing tunes from his CD together with Michael Barnett on Bass and Lionel Kramer on Drums.

We also have guest artists opening the Concert.

This will be a fabulous evening at our magnificent new venue: The Marriott Courtyard Hotel (11010 NE 8th Street Bellevue WA 98004) A light menu will be available for purchase from the Hotel, plus free parking on P3. Ticket Prices $13, (please note $1 ticket price increase). Students 18 and under $8. 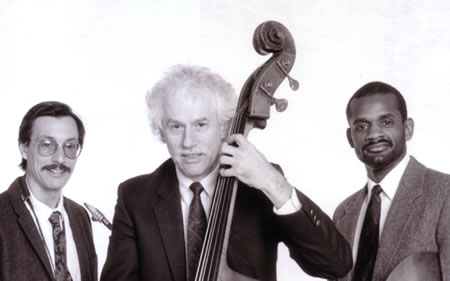 LARRY CORYELL:
Chuck, along with Jerome Gray and Overton, was a primary mentor for me back in 1964-65. Because of his encouragement, I was able to have a career that has surpassed all expectations. After I’d been in New York for about, oh, 7-8 months, Chuck sent me an unsigned letter–it was long, and interesting. But I didn’t realize it was he who wrote it until much later (I was stretching my mind out quite a bit then–a little delayed reaction).

It was a great letter.

Then we saw each other years later, when we both did the Village Gate; Chuck with Dexter and I doing solo.

JIM WILKE:
Chuck Metcalf was THE catalyst on the jazz scene when I arrived here in the early 60s. Chuck was playing lots of gigs with various groups, organizing sessions, and Chuck and Joni’s home in Madrona hosted the Sunday morning jams when the clubs had to close at Midnight Saturday nights because of Washington Blue Laws at the time. Great, wild sessions. Later, Chuck was one of the founders of the Seattle Jazz Society and actually leased the “castle” at Eastlake and Fuhrman to hold it for the Seattle Jazz Society. That became The Jazz Gallery in the 70s.

We had lots of talks and schemes to help keep jazz alive and vital at a time when jazz gigs were drying up. Without Chuck’s energy and ideas we would have had far fewer opportunities to hear and play jazz in that time… and by extension the Seattle jazz scene today. And what a pleasure to see him touring with Dexter Gordon…. man, that was exciting!

DAN GREENBLATT:
Chuck was a most generous spirit, certainly to me in a thousand ways, but I saw it all the time with others as well. He always went to everybody’s gigs, kept up with all the new cats in town, played sessions in his free time (not a lot of bass players, especially great ones, do this–think of how many times your sessions have died for lack of a bass player!), and in general was the kind of guy who maintained and created connections. A real community builder. And he supported all kinds of improvised music, including stuff that was controversial, cutting-edge, out of the box. He never sent out a dismissive or exclusionary vibe, except perhaps in the direction of the electric bass (“I don’t play guitar,” I heard him say once to somebody who asked him to “bring his electric” to a gig). He heard what musicians could do rather than what they couldn’t do.

Also a magnificent tune-writer. We did those two CD’s in the early 90’s (Elsie Street and Help is Coming), and between them there were about 20 originals, almost all gems. It’s unfortunate that his stuff never made it to fake books. I think his best work, especially Elsie Street, Forget Me Not, and Old Fashioned Love, among others, belongs in the same company with classics by Monk, Wayne, Joe, you name it. I still play these tunes, and they stand up next to anything and everything. If anyone wants charts, I’m happy to share them. His very last tune, with the foreboding title “Endgame,” needs to be played and heard.

… For me and a number of other musicians of my generation, Chuck was a beacon. That’s what I want to be like when I get to that age: lively, outgoing, fearless, open-hearted, creative. I saw him go through some very rough times but he never lost his spirit and his focus and his productivity. He was amazingly resiliant.

I am very thankful to have gotten a chance to know him, work with him, share musical space with him, help him in his times of need, and learn from him. Here in New York, at least in a very small circle, he will be mourned, celebrated, and missed.

A couple of years ago, a circle of musicians cohering around students of University of Washington professor and world-renowned trumpet player Cuong Vu started gathering at Café Racer, in the University District, to exchange ideas. It has been fruitful. This weekend, the Racer crowd celebrates its discoveries and camaraderie with the second Racer Sessions Fest. Participants include expressive, elbow-out tenor saxophonist Neil Welch (above), Bad Luck (Welch, drummer Chris Icasiano), Burn List (Vu’s quartet with Icasiano), Chemical Clock (with drummer Evan Woodle) and others.

Former Seattle bassist, and inaugural Seattle Jazz Hall of Fame inductee, Chuck Metcalf, has passed away after a long battle with cancer.

Word came via email yesterday and the tributes have started pouring in.

Jay Thomas:
He was a very important guy on the scene going back to the late 40s and 50’s… and during the 60’s he was Mr. Jazz in Seattle along with Bob Winn, Floyd Standifer, Jerry Gray and Dave Coleman. And of course Dave Tuttle and Bill Richardson.

Chuck knew a lot and he loved Monk and learned a lot of Monks music.
I remember going to sessions at Chuck and Joni’s house in Madronna right next to Walt Tianin’s. they would have party/sessions and invite the musicians that were at the Penthouse.

… The first time I heard Dexter [Gordan] was way back in the early 60’s and Chuck backed him at the Penthouse. Dexter played with a huge sound and when he played the End of a Love Affair on the bottom of his horn Chuck complained to me he had a hard time hearing his bass! Later in Chucks career Chuck was a member of Dex’s band … Chuck was soooo hip…what a loss.

John Gilbreath:
Chuck provided some valuable and painful lessons to me in my early days at Earshot Jazz. He mentored a lot of us, in subtle and not-so-subtle ways. I remain grateful to him.

I play my copy of “Help is Coming” pretty regularly on KBCS. I love the deep, woody tone, and the driving presence of his work. I’ll hit it hard tomorrow.

Trombonist Dave Tuttle, a first-call player on Seattle’s jazz scene who performed with Benny Goodman at Carnegie Hall, died Dec. 20, 2011. The cause was emphysema. He was 85.

Born in Seattle, Mr. Tuttle attended Roosevelt High School and Cornish College before becoming a professional musician. He started in vaudeville at the Pantages Theatre, where he taught a young, unknown tap dancer named Sammy Davis Jr. to play the conga drum. Mr. Tuttle later played with band leader Norm Hoagy, the Cascade Symphony and in the pit band for hundreds of shows in Seattle theaters.

Goodman invited Mr. Tuttle to go to Russia, but the trombonist turned him down because he had just started to raise a family, said Mr. Tuttle’s widow, Olga. The Tuttles were married nearly 65 years.

Besides his wife, Mr. Tuttle is survived by his brother, E. Clark Tuttle; four children — Victor, Marty, Julia Rouse and Melanie Hingson; and 15 grand- and great-grandchildren.

Mr. Tuttle’s life will be celebrated 3-5 p.m. Jan. 15, at Edmonds Conference Center, 201 Fourth Ave. N., Edmonds. Remembrances may be made to the Carol Rowe Food Bank of Edmonds or a favorite charity.

A memorial has been announced for Seattle jazz pianist Paul West, whose obituary ran in The Seattle Times on Dec. 15. The memorial is on the same day — but at a different time — as the service for Mr. Tuttle. Mr. West’s memorial will be from 5-7 p.m. Jan. 15 at the Center for Urban Horticulture, 3501 N.E. 41st St., Seattle, just east of the University of Washington.

Nominations Wanted:
The Golden Ear Awards recognize and celebrate the outstanding achievements of the previous year in Seattle jazz. Nominations for the 2011 awards are currently being accepted. Please email nominations to [email protected] by January 6, 2012. The official voting ballots for the 2011 awards will be printed in the February issue of this publication and available at www.earshot.org.

Send us your suggestions for

Each year the Golden Ear Awards program provides an opportunity for Seattle jazz fans and performers to celebrate the region’s jazz accomplishments of the previous year. Earshot Jazz initiated the Golden Ear Awards in 1990 to recognize the accomplishments of Seattle jazz artists over the previous year, and to induct significant members of the jazz community into the local Jazz Hall of Fame. Over the years, the award categories have shifted slighty, but the essence of the process has remained the same.

“Pearl Django plays gypsy jazz…and they do it with such verve, skill and pleasure that they’re pretty much irresistible to jazz and non-jazz listeners alike.” — Seattle Weekly

Joining Pearl Django, special guest and award winning guitarist Martin Taylor has established a unique musical career as an internationally acclaimed musician, and his inimitable style has seen him recognized as the world’s foremost exponent of solo jazz guitar playing. As well as being a true guitar innovator, he is also a master concert performer, dazzling audiences with his solo shows, which combine virtuosity, emotion, humor, with a strong stage presence.